The Fog of War 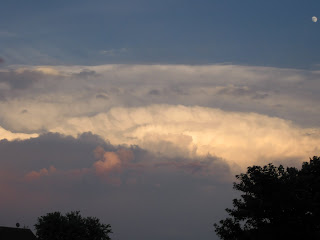 We had a weird sunset the other night, lots of strange clouds stretched out like a big ocean in the sky. I don’t think I was really able to capture it on my little camera (though you can see the moon there too in the right corner). It was actually a bit overwhelming to look at .

In some ways plotting is like this for me. (Which is relevant since I’m working on that outline for CoD.) I have all these ideas, swirling around in a big pile, but they move and change shape, even as I try to capture them.

It’s frustrating in some ways because I have to force the issue in my head a little bit. The publisher requires a 10 to 15 page outline to make sure we’re on the same page as far as the direction is going. And that’s not to say its set in stone – an outline is just that – a concept.. I’ll be able to change it as I need to, but as a panster it’s still hard for me to organize the ideas into something more coherent than notes scribbled on virtual index cards. (Which is how I tend to work.)  Something things just don’t “take” until I actually being to construct the story directly. Or sometimes I start out in one direction, but then the characters decide they want to do something else. 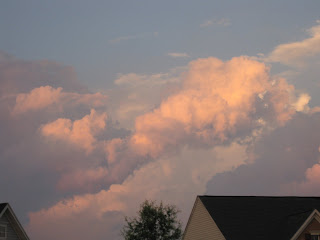 Plus, there are times when I have trouble finding interest in writing a story once I’ve actually got the main theme scratched out. Like whatever was trying to find its way to the page is suddenly satisfied once the words are put down, regardless of their condition. (or lack thereof).

At any rate, I suspect a change of venue won’t hurt the flow of ideas much. It’s rather laughable that I’m going to meet my initial deadline of tomorrow – the last few days at work and a sick kid didn’t help much and I’ve really only got the most basic of ideas down (usually a paragraph for each chapter – X will happen here. Y dies. A is going to say something about B.) That’s really about as plotty as I get.

Here’s hoping the sunsets at the beach will inspire something a little more concrete.

(Of course, I get to hang with Simon on Friday night with the mutual families. I hear he drinks vodka and wears a kilt. And he’s writing about vampires now – but not the ones that sparkle. I’ll bet that’s pretty inspirational too.)  😉

This entry was posted in pantster, writing. Bookmark the permalink.

2 Responses to The Fog of War