Weekend in a NutShell 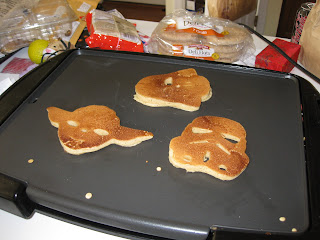 Connor likes pie. I know this because all he’s been singing lately is this little ditty about “I like pie! You like pie! Mama likes pie! Daddy likes pie!” Which is a blatant lie, by the way – I detest pie in all its sordid forms. Maybe chocolate pie is okay, but I won’t touch it if it has a fruit filling of any kind.

Anyway. So Saturday morning I tried my new Star Wars pancake molds – and they are totally awesome. Yoda’s ears have a tendency to break when you flip them over though, so just watch for that. I used cinnamon-graham cracker pancake batter for these and they were soooo good.

In the afternoon I took the kids to McDonald’s and then to the studio where I was getting my photos taken. (Which turned out to be a warehouse in Sterling.I got lost coming home. I ended up in Leesburg. I suck.) Photo shoot went well. Kids were slightly obnoxious, but that’s okay. I did manage to choose one picture out of about 70 proofs that I liked well enough – I just *hate* the way I take pictures. I’m way too self-conscious, I guess. All I ever see are the flaws – and somehow I always seem surprised when I *don’t* look like a teen model. Honestly, is it too much to ask that my fantasy life and real life match up every once in a while??  (I chose picture number 42, btw. Seeing that it is the answer to Life, the Universe and Everything, I figured I couldn’t go wrong there.)

Interesting note about the photo studio – seems they rent it out for a lot of fetish shoots. The photographer was kind enough to point out the chains hanging from the ceiling. And last week they did a shibari shoot – big rope webs everywhere. Kinda cool, really and probably very interesting to watch. Although with my kids there? Maybe a bit of creep factor too. (There was a gas mask on one of the dummies you could use for your shoot if you wanted. Erm. No.)

Yesterday, I spent the majority of the day at the pool with the kids. My in-laws finally broke down and bought a pool heater, so between the sun and the water, it was like taking a 3 hour bath. Connor fried. I fried. Lucy merely turned a slightly darker shade of nut-brown. (Yeah, I’m jealous. Good thing I love her.) 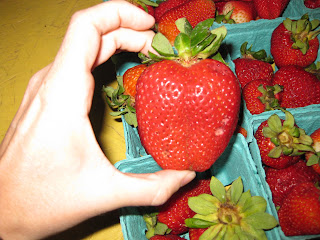 And today, we went out to Great Country Farms to go strawberry picking. Only they were out of strawberries. I suspected they would be since it’s their strawberry jubilee weekend and they tend to run out of them pretty quickly. We were still able to buy some though and they have plenty of things for the kids to do so it wasn’t a wasted trip by any stretch.

And to be honest, it was about 95 degrees F here and humid as hell, so the idea of sitting in a strawberry field wasn’t overly appealing.

Yes, that is a *monster* strawberry there.  We bought some fresh cherries too, as well some awesome lavender and lilac soaps, and various flavored syrups. (Maple & Praline, anyone?) We finished up the afternoon with a wine tasting up at the vineyard. Which really means that mr myn did the tasting. The rest of us bought a plate filled with various cheeses, grapes, strawberries and freshly baked bread and had a nice time of it in the air-conditioned balcony, staring out over the mountains.

And tomorrow, I’m taking a mental health day and staying home from work so that mr myn and I can have a date day. It’s supposed to rain, so visions of a picnic at Great Falls have been dashed, but I’ll settle for Cheesecake Factory and Prince of Persia.

This entry was posted in random, updates. Bookmark the permalink.

6 Responses to Weekend in a NutShell