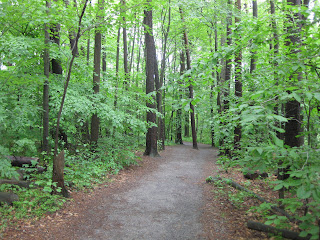 The four of us went for a walk in the rain  on Sunday. Specifically Burke Lake Park – which has a nice playground and a mini train and a carousel. Good stuff, all the way around…but it had been pissing rain since the night before and there wasn’t anyone really in the park. The playground itself was too wet to do anything with and the train wasn’t running so we just went for a walk.

We didn’t manage the whole thing – the entire lake is like 218 acres but we did maybe a third there and back. Not because I wasn’t willing, but Lucy wasn’t going to be able to do all of it without some sort of stroller.

We stopped at an overpass and watched the swallows darting in and out beneath the bridge at one point, as well as some turtles and a great blue heron. We also saw a hairy woodpecker, a chipmunk, several large fish…and a random pair of shoes. 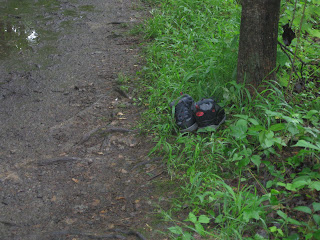 They were in pretty good shape and just sitting there beside the path. I took a picture of them, since for some reason they intrigued me. They weren’t right by the water and there wasn’t anything of interest nearby. So, I have to wonder – did the person just walk out of his shoes and disappear into the woods? The shoes don’t look muddy or busted.

And I’ll admit, I’ve always had a strange curiosity about seeing random shoes on the road – I don’t mean the ones middle school kids toss over the telephone wires for fun – but just that one shoe sitting in the highway. I mean – did it fall off the back of a truck? Did someone toss it out the window? (These questions keep me awake at night, I swear it). I mean, how can you *not* realize you’re missing a shoe? 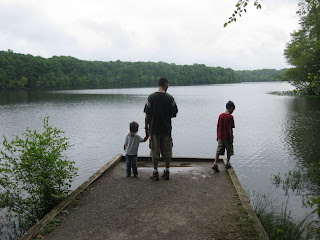 So what, then, possesses someone to just leave his shoes by the side of the path? I smell a story here.

Or at least the start of one.