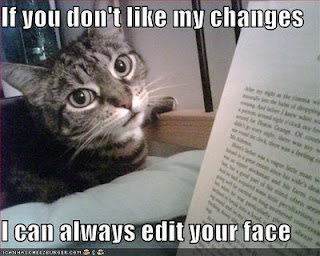 I printed out my manuscript today. I’m not sure why it is, but I seem to edit better when I’ve got the words on paper to look at. It’s a little more visceral to be holding that red pen, anyway – even if it’s a pita to haul around. I know there’s quite a few places that need polishing. When I dirty draft/edit like I have been, the use of certain phrases becomes pretty repetitive at times, and I can tell I’m overusing things like glance, gaze, smirk, snort, etc. Most of them I’m just going to take out, I think – otherwise I’m going to have nothing but people who stand around raising their eyebrows at each other. It’s okay in small doses, and maybe it works when I’m just writing up a few pages here and there, but as a whole it starts to get a tad obnoxious.

It’s probably one of my biggest weaknesses, actually. I can’t seem to have characters that just stand still. There’s always *something* going on – lip chewing, face pulling, thoughtful glances – and really, it doesn’t need to be there. It clutters up the prose and the dialog more than it needs to. So, that’s one of the first things I’m hoping to clean up in the next few days (along with the editor’s edits, of course.) 😉

There’s also a few scenes that I will probably have to cut. Some of them have been with me since the beginning, so it’s really hard to decide that they’re no longer needed. As they say, it’s whatever drives the story forward…and some of these don’t. Not that I won’t save them, since you never know when they might work somewhere else. This includes streamlining a few of the smuttier bits, unfortunately. It’s going to have to be “less is more” for now – since it’s being marketed as a straight UF and not PR, we get less cock talk. (And yeah, I had a love scene that was about ten pages**, but not anymore. Alas.)

The end does still need more work – things wrap up a tad too neatly, but it’s not quite as hopeless as I feared. Part of this is because it was requested that my hero find a reason to leave at the end. The way it stands right now, it’s not overly plausible and I kind of infodumped his leaving…and that’s a really shitty thing to do to a reader, so I’m going to fix that. Unfortunately, the heroine really does love him…even when I made him a bit of a bastard, but I don’t think he really earned her forgiveness that quickly. Or he shouldn’t have.

(And then they tumble into bed again anyway. *eyeroll*)

The lousiest thing of all? Flipping through Kushiel’s Dart one night to take my mind off things and realizing that I will probably never be able to write like Jacqueline Carey does. It’s hard to go from that to my own writing , honestly. (And btw, as a writer, it’s probably best not to compare your writing to anyone else’s. Doesn’t do a thing for you.)

** Yes, I realize that in romance/erotica/etc  it can take ten pages just to peel off one’s stockings, but it’s pretty good for me.

This entry was posted in editing, updates. Bookmark the permalink.

7 Responses to Moving Right Along