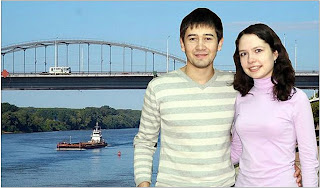 You know, my inner bullshit meter went off a bit when I read this article online a few days ago. Maybe it’s the way it was mentioned that the girl had been kicked out of her parents’ house after “falling” pregnant.

Really? How does one “fall” pregnant? And for that matter, where’s the guy that “tripped” her?

Anyway, that’s just me being snarky. If it is actually true, then the story is pretty cool. (I hope you’re taking notes, Nicholas Sparks.) The very concept of a young man going to a bridge to kill himself because his fiancée died in an accident the day before their wedding, only to find a young woman attempting to kill *herself* for being kicked out of the house seems to be one of those “clearly they were made for each other” types of things – and one probably destined to show up at the Sundance film festival, for example.

Only instead of having it be a simple matter of two young people finding each other in the moment of their worst grief and falling in love, it would star Ewan McGregor (well, I can hope, anyway. Dude is *seriously* hung. And if this becomes a arthouse film, there had better be some full frontal. Just sayin’.) as a tortured poet, always searching for his “lost Lenore.” And in an terribly odd twist of fate that our hapless couple wouldn’t discover until after the wedding, it would become known that the guy that got the pregnant woman…well, pregnant…was the driver in the accident that killed Ewan’s previous wife-to-be. And he’s in a hospital. In a coma. And the movie would end with Ewan thanking the coma man for bringing everyone together. Or jumping off the bridge, after all.

Clearly, I need to get more sleep.

This entry was posted in no sleep 'til brooklyn, weird love. Bookmark the permalink.

3 Responses to Stranger Than Fiction