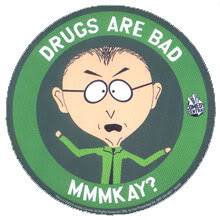 I can easily admit I’m the Queen of Chronic Disorders. I’ve got several. I’ve been on a lot of medications with varying degrees of success – everything from low-grade antidepressants for pain to full-blown anti-seizure meds: Elavil, Neurontin, Vicodin, Voltaron, OxyContin, Flexeril, Xanaflex, Celebrex, Elmiron, Lexapro and my new favorite, Ultram ER.

Now, I’m used to a fair amount of side effects. Most of the pain killers or anti-depressants would give me a nice form of cotton mouth or make me a bit sleepy, at least until I got used to them. (And I’m not on any long term drugs at all at this point, so lucky me), but the two worst offenders for me were the Lexapro and the Ultram.

I went on the Lexapro at one point last year for anxiety issues – something fairly low dose, and I did notice that I immediately felt a bit more mellow. By day 2, I realized I was getting up to pee a lot in the middle of the night. By day 3, I lost the ability to have an orgasm. By day 4 I had the worst Interstitial Cystisis flare up I’d had in maybe 10 years. Needless to say, I went off it rather quickly. (And what they don’t tell you is that you can’t just go “off” a lot of these drugs w/out major side effects – you have to wean off of them.) And it turns out that the frequent urination thing was a side effect to the drug, but not one that they really list. I had to do a fair amount of web-searching, but eventually I did find it. The sex thing bugs me too. A lot of the meds will damp down a sex drive, but to completely lose the ability? Ugh, on *so* many levels. And unacceptable.

Now, I’ve still been having back issues as  many of you know. So I went back to the doc’s on Monday and we discussed the MRI and the fact that my SI joint had apparently fallen out of place again. They reset it. Talked to me about getting an SI belt and sending me to see some sort of uber-PT person with a “lot of experience.” Seems my flexibility and loose joints are getting in the way of things. I do have scar tissue encapsulating the nerve where they did the surgery, and there’s not much they can do about that. The disc at L3 is starting to herniate, but on the right side, although that’s not causing any issue right now. The arthritis? Icky. 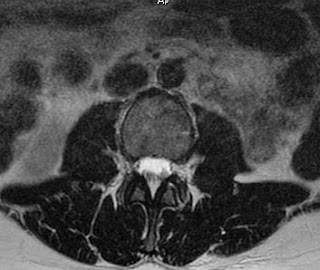 This is a shot further up on my spine. It’s more or less normal, and I’m just showing you for comparison sake. (This is one of those transverse shots – like if I was cut in half. Isn’t that yummy?) The big thing in the center is my discs, and the white thing is the nerve column and the little knuckle thing is part of the spine.

The key here is that those knuckle things are small and about the same size. 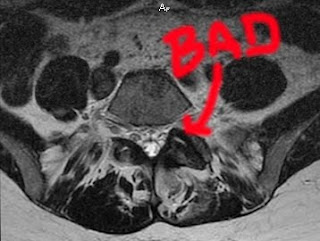 Here’s a little further down – about the L5 area. See how much larger that one is on the left? (My left, your right). And both are larger, but you can see that left one is really kinda gorked up. The PA compared it to someone with arthritis in the hands – like when they have really big knuckles. Same thing apparently occurs in the spine.

Only problem is, there’s nothing they can do to fix it.

So, they want to do a steroid injection to see if that helps with the inflammation and maybe the back muscles will stop guarding so much. And if it works, then the next step is for them to go in there and just burn out all the nerve endings, the theory being that if they can’t fix it, at least I won’t have to feel it anymore.

Yeah, that sounds really awesome to me too.

In the meantime, doc decided to give me the Ultram. I took one pill on Monday night and immediately got a super dry mouth, but I can live with that. Keep in mind, I asked about side-effects and I was told maybe some GI stuff, so no big deal. So dry mouth and then a hot prickle on my shoulders and neck, but nothing too big.

I went to bed at 1 AM and laid awake for most of the night. Ah, insomnia. And then I must have dozed off because when I woke up, the room was spinning. I had vertigo for pretty much the entire day. And I puked every time I sat up or tried to go to the bathroom. And whenever I tried to pee, I couldn’t. (So, yes – awesome, I would stagger to the bathroom, puke, try to take a piss, puke again and *maybe* then I could pee, and then only after I’d sat there for like five minutes). I had hot flashes, itchy skin, sweats, tinnitus, and the  inability to focus my eyes.

Mr myn called the doc. You know, to find out if I needed to go to the hospital or something. Eventually PA got back to me and seemed really surprised. She thought I might be having an allergic reaction and should try some Benedryl. And if I was still having trouble by that night, that I should go to the ER.

I did neither. I laid in bed for the rest of the day and today, I’m sorta better. Yay.

This irks me greatly. Not just that I had the reaction that I did, but that it clearly *wasn’t* an allergic reaction. And yet PA was clueless.  30 seconds of searching on the internet found me the answers I needed:

Clearly, I’m not the only one tho –> https://www.askapatient.com/viewrating.asp?drug=20281&name=ULTRAM

Do I have a point to all this? No. Just that in the end, you really have to do your own research on some of this stuff. I think doctors can be too quick to just prescribe shit and then blow you off when you actually have real problems.

This entry was posted in back pain, drugs, grumpy as fuck, tmi. Bookmark the permalink.

7 Responses to Drugs Are Bad, Mmmkay?