Give Me Chocolate or Give Me Death… 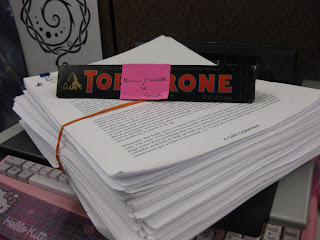 You know – in case you didn’t really believe my tweet that my awesome editor, Danielle, sent me chocolate with my revisions. (Yes that is a pink Hello Kitty keyboard. Yes, I’m a freak. Sorry.)

I’m still mulling the notes over, honestly – but in more of a potential “what can I do to really make this rock” sort of way than anything else. And because I know there will be two more books, I can also try to look at weaving some of the plots together so they will be a bit more cohesive between stories.

I tend to think long-term. I’m very used to those long Fantasy epics, so when I first started writing, I assumed I could do the same thing…but as an aspiring author, writing a series is frowned upon – or at least pitching a book as part of one, anyway. As anyone who’s tried to get an agent or an editor knows, whatever book you are writing, it has to stand on its own. (At least, unless you are just so super cool that you *can* sell a massive series up front, but those powers are very much unknown to me. LOL).

This means things are supposed to tie up neatly – and in the case of romance, there usually has to be a HEA (Happily Ever After) as part of that.  (Which I mentioned sort of forcing in a previous post, and I can totally admit that I  rushed things a bit, because I was told it was “expected”.) Knowing for a fact that I’ve got three books to play with hopefully means I don’t have to be *quite* that neat. Or that happy. 😉

In the meantime, in some ways the revisions are a bit like starting over, but in a good way. Everything is just full of sudden potential, like I’ve got another chance to produce something great. 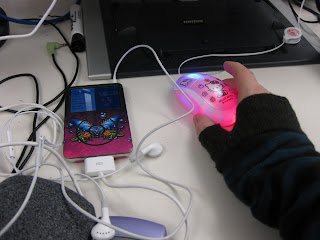 And completely unrelated, here’s a picture of my new arm socks, since La-Tessa wanted to see them. (Or at least one, since I was taking the picture with my other hand.)

12 Responses to Give Me Chocolate or Give Me Death…