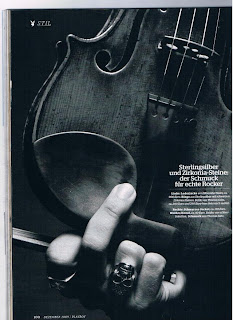 Forgive me the utter fangirlishness of this post, if you will. This morning has been a rather wretched affair of unanswered emails as I discovered that my “real” website had been suspended, even though I just paid the host for another 6 months of service. I have yet to get a single reply except that they have forwarded my issue to billing. But that was 8 hours ago, and I refuse to fuck around with my hosting, so I’ve dumped them and found a new one. Let’s just hope DNS kicks in quick enough that I don’t lose too much email.

Anyway, so about this whole perception thing. Yes, in looking at the picture there, it seems pretty harmless. Just a hand holding a violin. And I’ll admit, I’m dreadfully ignorant about how one actually holds a violin. Maybe that actually is how you do it, and I’m just a completely perverted person for seeing something different. Although, you have to wonder, if holding a violin in such a way is so common, then why bother to photograph it at all? Why the focus on *that* particular gesture?

And the short answer is that the picture came from the December 2009 German edition of Playboy. Which we all read for the articles, obviously. *eyeroll*

For some reason, it tickles me as a fairly pervy sort of image, maybe more so because it *isn’t* as blatant as, say, a naked person. It takes what is most likely a common gesture and turns it into something darker. Secret. And I don’t mean it quite so literally, perhaps, but as a romance writer, I could take such an image and meld it into something far more erotic. A secret promise between lovers, captured in the careless swirl of a finger over the faded wood grain of the hero’s beloved instrument as he catches the heroine’s eye, for example. Is he being cheeky? Seductive? Cruel?

And obviously, it could be any of the above depending on the setting and her reaction. But still fun to think about, and probably more fun to write up. 🙂

My point is, even if it is a perfectly harmless sort of image – as a writer, I have the ability to change a reader’s perception into something else, if only with my choice of words.

Or maybe DG isn’t actually fingerbanging his violin, and I’m a pervert who reads into things too much. Which is okay too.

This entry was posted in craft, david garrett, writing. Bookmark the permalink.

One Response to Perception