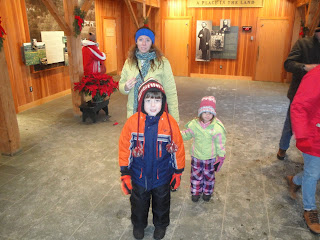 I will preface this blog by saying that I don’t photograph well. I spent most of my childhood trying to avoid the camera, so if you should see a picture of me and you go blind, don’t say you haven’t been warned.

Anyway, as part of our vacation to Vermont, we took the kids to Billings Farm. It’s one of those historic and quaint sorts of farm houses with a working dairy and all that. And from a learning perspective it was pretty cool. I took a lot of photos of the house and wrote down notes as to how things were set up as far as the kitchen and the pantry and the cellar dairy were set up. I’m pretty sure at some point I’m going to need to describe those sorts of rooms in my writing so it will be nice to have the reference. 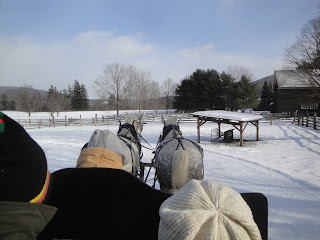 Part of the tour included a ride in a horse-drawn open sleigh. Please keep in mind that it was 7 degrees F out, not including a very wicked wind that probably dropped it to about -15. The dappled Percherons were very pretty, I’ll give them that, but nowhere have I ever read in any sort of romance book, where the couple is being drawn by said pair of magnificent horses through the snow, is a mention of just how sweaty a pair of horse bums can get. And sorta stinky too. Especially when you are *right* behind them. 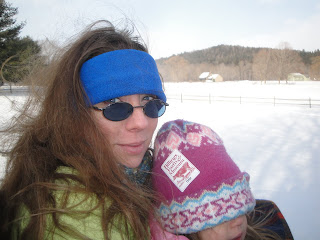 Even with the wool blankets, it was pretty chilly. Lucy ended up sitting on my lap and just pulled it up over her head. The ride probably lasted all of five minutes, but I don’t think anyone was particularly upset to see it end. Did I mention cold? It was cold. It was really, really cold.

And I’m stylin’ in my blue shades. Which are sadly breaking.

If anyone runs across a set like that, please pick them up or tell me where I can get them?

And then we headed up to the actual farm house itself, where Lucy promptly attacked the 100 year old xmas decorations and tried to eat the really nasty old lemon drops from a sachet on the tree. 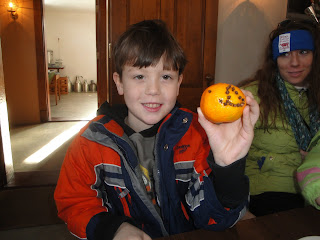 We settled for heading to the basement and making pomanders with tangerines and cloves.

And a nip of  something stronger in the bottoms of our cider cups. (Just a nip, mind.)

And then we headed over to see the cows. Which is okay, but kind of sad when you realize the cows pretty much spend the entirety of their lives either caged or chained up in a long barn. And constantly pregnant.   Though I suppose they didn’t really seem to mind.

At the end of the day, though, it was fun and a worthwhile trip. And it makes me utterly grateful for things like heated trucks.

And vacations in Florida.

This entry was posted in random, vacation. Bookmark the permalink.