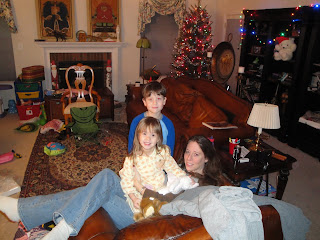 Okay. It’s Christmas Eve. Presents are wrapped, egg-nog is flowing freely and kids are nearly ready for bed. (Though apparently Connor has a touch of the demon child eyes going on in this picture.)

Good news is that we’re off to Vermont tomorrow so I’ll be offline for a few days as there isn’t really any internet where we’re going. (mr myn’s parents have enough help to see them through for a few weeks and we desperately need to disconnect from the world for a bit, so I’m not really thinking too hard on it.)

My cats are being boarded and fixed up at the vet’s and are less than thrilled with me. I was going to take the stray too, but at $22 a day per cat, plus the shots and dental work my cats need, I’m already up about $600 and I just can’t afford another one. She’s got one more night in the basement and I’ll leave as much food out as I can. She’ll have to rough it in the insulated cat house out back for a few days (and hopefully the neighbors will help out a bit), and I’ll take her to get checked out when I get back. On the other hand, she’s been roughing it outside for nearly two years now, so something tells me she’ll be okay. 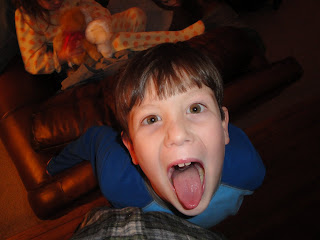 And isn’t *this* a lovely picture?  LOL.

Otherwise, I’m bringing nothing more with me than a pile of books, my sewing, and my netbook to write on. And in theory, some index cards to study from, though I’m not sure I’m really all that eager to learn more Powershell Scripting just now.  On the other hand, the SteamPunk story has suddenly become a reality in my mind. Spent part of this morning sketching it out by hand in a notebook, and the voice of the protagonist wrote the first chapter in my head last night, so I’m feeling pretty good about it. It will definitely be a YA sort of book and I’m rather looking forward to getting some of it down. (Though I hesitate to try juggling three WIPs, but who am I to deny the muse when she comes knocking?) 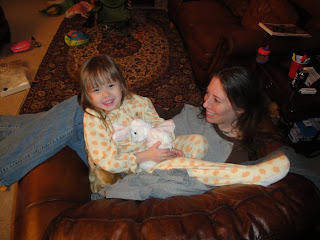 ** And crap, I have a big nose. However, I’m rather enjoying these lovely new jeans from Old Navy that mr myn picked up for me today…which is good, since my other pair is about to have the ass ripped out of them. Again.**

One Response to Off for Christmas