All I Needed to Know About Writing, I Learned From Max & Ruby. 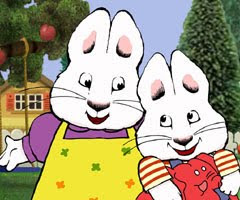 Honestly? I hate this show. It’s creepy. Ruby is a anal-retentive little bunny with OCD. Max has a weird rubber elephant and a wind-up mechanical lobster. And flipping chicks. Why doesn’t Max talk? WTF are their parents?

Questions like this don’t keep me awake at night, but I do wonder about it when I’m stuck watching it with Lucy.

However, putting aside the weird factor, I caught the episode “Ruby Writes a Story” last night. I was hoping to embed part of it here, but I couldn’t find it online, so suffice it to say, Ruby wanted to write a story and I was a little struck by all the little mechanisms of procrastination that she goes through – getting the paper lined up, just so. Getting her nice new eraser lined up next to a stack of sharpened pencils. Deciding that writing is thirsty work after getting a single line down. And then getting a stack of cookies after she starts over again.

She can’t figure out what the story should be about and doesn’t get much farther than “Once upon a time, there was a beautiful princess.” Take two is “Once upon a time, there was a mysterious mermaid.” And the whole time she’s trying to figure it out, Max is running around shouting “Cowboy!” and doing annoying cowboy things. Eventually Ruby gives in and agrees with Max and decides to write about a cowboy.

On the surface, it’s just another silly episode, but I can’t help but wonder at it. After all, how easy is it to fall into the trap of not writing until things are “just so”? “I’ll write after I do the dishes, clean my office, scrape the toilet with a toothbrush…”  Funny how all those little disgusting jobs all of a sudden have to be done RIGHTNOW when the scary concept of sitting down and actually getting those words down on paper rears its ugly head. At which point, I suppose I can only tell you that writing happens when you sit down and make it happen. (Which you know already, don’t you?)

I know some people really do need a clean place to write, or a quiet place to write, and if that’s the case, then I suppose it behooves them to make sure that place is always set up and ready to go. (Personally, that’s why I carry the netbook around – I can sit and write pretty much anywhere, anytime, assuming there isn’t a major outside distraction like the kids.)

The other thing that struck me about this episode was the cowboy thing. If we take it a step farther and say that Max sort of represents Ruby’s muse, it makes an interesting parallel in that the more she kept trying to force her muse into some other direction, the more she couldn’t write. The moment she gave into it and accepted that *this* story wanted to be about a cowboy, she was able to pick up the pencil and start writing.

Of course, I’m a sucker for archetypes and Jungian mythology, so maybe I just have too much free time on my hands?

This entry was posted in writing. Bookmark the permalink.

One Response to All I Needed to Know About Writing, I Learned From Max & Ruby.