I almost ended up not making these yesterday, and it’s a good thing I hadn’t gotten very far – if the power had gone out when I was mixing, the entire batch would have had to be tossed. As it stands though, I decided to document a bit of the baking process as I’ve had a lot of questions over the years on how to make them. (And it’s not that it’s overly tricky, but it doesn’t take much to screw it up. Given the amount of time it takes to make them, that can be a bit heartbreaking. LOL.)  Last time I made these I was in Canada and they turned out like ass – though I think part of that was because I had a hand beater and a shallow bowl, which really doesn’t work. You need a fast mixer. (It could also have been that the elevation screwed things up, but I don’t know.) 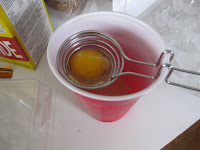 Egg separating: If you use an egg separator, I highly suggest doing each egg separate and then pour it all into a bowl. It’s pretty crappy to get nearly all the eggs done only to have one of the last ones crack incorrectly and you’ve lost the whole batch. 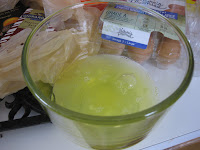 And here’s what a bowl of egg whites looks like. (I made a double batch, so this is 12 eggs). You need to leave these out for at least an hour. Mine were out for 45 minutes and then the power went out for 3 hours after that. I just put them in the microwave to sit and they seemed to turn out just fine. 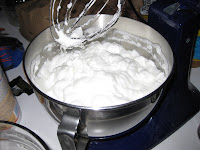 After you put the salt in with the eggs, you need to beat it until the eggs hold their shape. This is about 5 minutes at high speed. It should look pretty foamy and lumpy and kinda nasty. 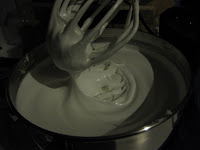 Now you have to add the sugar. The key here is to add it slowly and make sure you have the mixer on its slowest setting. What I usually do is set the timer for 60 minutes and every two minutes put in two tablespoons while the mixer just goes. Four cups of sugar (double batch) will take a while and unfortunately you’re stuck just sorta standing there watching the clock. When you’re done, the batter should be creamy looking, but kinda stiff, too. 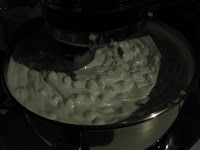 Then it’s 10 more minutes at high speed with the vanilla and vinegar added.  After that last 10 minutes I added a 24 oz bag of chocolate chips, and stir it up just enough to mix them into the batter. If you stir too hard, the chips will kinda melt into the batter and you’ll end up with a more chocolate sort of meringue. 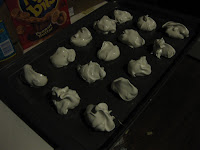 Now, when you put the batter on the cookie sheets, this is pretty much make or break time. If you’ve done everything right, the cookies will just sorta hold their shapes like little lumps. If not, they’ll essentially melt into puddles of flat goo. Tasty goo, for all that, but not really conducive for baking.  I baked each tray for 45 minutes at 250 F. This took about six hours for a double batch and a small oven. (And since this whole thing takes about 8 hours to do, you can see why I only do these about once a year). 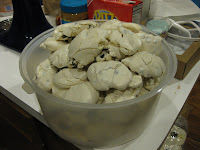 On the other hand, you can see how much it makes. That is a cake holder there and it’s overflowing. My initial intent was to make some to give away at work, but seeing as we’re probably snowed in for a bit, guess I’ll just have to suffer and eat them all myself 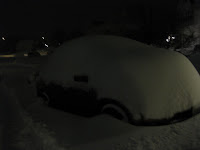 And randomly, just to show you the last of the snow, here’s a shot of my Murano last night. 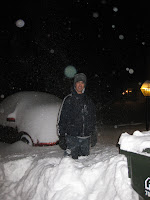 And here’s mr myn, for comparison. Keep in mind he’s about 6 feet, 2 inches.

Yes, I know the great white north gets more, but DC shuts down on the *threat* of snow half the time. Two inches can shut down schools for days.

Mr myn’s mom is coming home from this hospital today so he’ll be leaving me with the truck and he’ll take his off-roading Jeep, so at least I won’t worry about having to dig myself out. Not that I’m lazy, just that after the back surgery, shoveling snow is very low on my list of approved activities.

This entry was posted in baking, snow. Bookmark the permalink.

3 Responses to On Meringues