Dreaming of the Tree Man 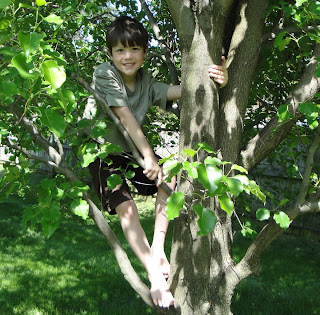 Come away, O human child!
To the waters and the wild
With a faery, hand in hand,
For the world’s more full of weeping than you can understand.
–W.B. Yeats

Connor had a nightmare the other morning – bad enough that he ended up in our bed at some point in the wee hours. (Actually, when I woke up, *both* kids were snuggled in there, but that’s okay.) Now, I still remember some of my dreams from when I was a kid. I had a pretty vivid imagination and a penchant for watching horror movies I shouldn’t have been watching. So, I’d get dreams about zombies and knife-wielding assailants chasing me down through the woods or in my basement, usually waking up just before I got slaughtered.  Although now that I think about it, usually I would escape free and clear and then have to go back into the darkness to find someone else – my mother, my dog, etc.

Strangely enough, the dreams that disturbed me most weren’t monster dreams, but dreams where I had no control – usually it would be me and my brother in the back seat of a car that drove itself. For some reason, that concept terrified me.

It still creeps me out.  These days I don’t have as much in the way of nightmares – although, sometimes, like Abby, they do show up in the form of sharks. (And yes, only when I feel my life is out of control do such dreams show up…or at least during the times in my life when I feel like I am powerless to do anything about whatever issues are going on). Scary, but predictable, anyway.

But Connor dreamed of a Tree Man. More specifically, he dreamed of a house without mr myn. And while he was sitting on the sofa, a man came to the door – a tree man, and Connor went to go live with him for a while. He couldn’t tell me where they lived exactly, only that it wasn’t our home. And then he came back for something and the house was empty. And this greatly upset him and woke him up, leading to the exodus towards my bedroom.

Usually his nightmares are empty things – fights over toys, being chased by Megatron, etc.  But this seems awfully deep for the age of 6, and it freaked me the hell out, honestly  –  though if I were to probe a little deeper I might be able to find the answers as to what’s lurking in the depths of his psyche.

Or maybe, he’s watching me play too much Dragon Age (which has an Ent-like tree man looking for his acorn). The mind boggles. >_<

This entry was posted in dreams. Bookmark the permalink.