Can the Tooth Fairy Fly in the Rain? 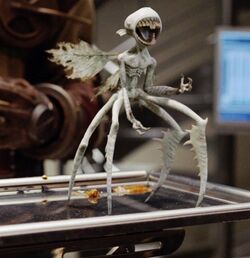 Not that teeth aren’t exciting in their own right. Connor lost two of them this week – although we had to have the dentist take them out. Probably didn’t help that he had fallen on the playground about a month ago and knocked all four of the bottom teeth loose. They didn’t come out but they were pretty wobbly. Still – the very front two have been barely holding on for the last few weeks and a quick glance inside showed the adults growing in quite nicely behind them. (He’s also got a couple of 6 year molars popping in there too, but he doesn’t seem quite as concerned about them.)

So we took him to the dentist for a quick look and sure enough, the dentist just wrapped them up with a quick bit of tissue and popped them right out.

And then the tooth fairy stuff began. Connor brought the teeth home in a little box and stuck them under his pillow and waxed poetic about how the tooth fairy better bring him more than just a quarter. (Standard fare for my day, if I recall, but maybe inflation raised the rates?)

Only problem? We forgot to swap them out for the money.

Call it being distracted, or too tired, or just neglectful if you like, but in the end we had to try to come up with a reason. And actually he came up with one of his own, namely that maybe he wasn’t all the way asleep and that’s why she didn’t come. I actually just looked out the window and mentioned that since it had been raining so hard for the last few days and nights, the tooth fairy couldn’t come because she doesn’t like getting her wings wet.

Which I suppose could be true. *cough*

She showed up rather generously the next night, however – and whether it was two for one night or a healthy dose of parental guilt, she left him $5.00. Which is burning a hole in his pocket as we speak.

Out of curiosity I did a little research on the tooth fairy and found it rather interesting that such a strange little legend shows up in a number of cultures around the world. (Although sometimes in the form of a mouse, apparently. Something about rodents and the teeth that never really stop growing).  But still. What is it about teeth that we make such a big deal about them falling out? At least the baby ones, anyway. Obviously teeth are important for things like..um…chewing. And if you’re a dog they keep your tongue in your mouth. And they’re a sign of good health. Hmm. Perhaps I’ve answered my own question.

Strangely enough, I actually give props to the Tooth Fairy in SotI for about a paragraph or so. Cultural phenomenon, indeed.

A flare of silver light burst from the second angel as he materialized from the blurred edges of the CrossRoads. I winced against the sharpness, my night vision blinded. Brystion snarled as the Celestial’s beefy hands gripped his shoulder. Before I had time to take a step, they faded into the shadows, a faint shower of silver sparkles floating over my Rocket Dogs like a Tooth Fairy’s wet dream.

This entry was posted in Connor, tooth fairy. Bookmark the permalink.