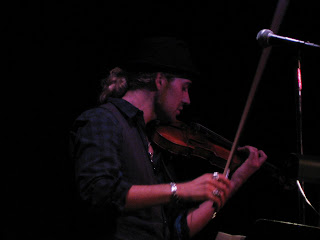 Long story about today, which I’m not going to get into – though needless to say, mr myn’s Jeep is pretty much toast, and I am owed much groveling.

In the meantime, I made it early enough to get a front row seat.  Which would have been awesome, except I apparently chose the wrong side of the stage. David seems to play a lot to his left (go figure and duly noted for next time) and actually quite a bit to his band. So there was a fair amount of time when I basically did nothing but stare at his back.  (And, um.  Backside.)  My camera also didn’t do too well in the dim lighting – we weren’t allowed to use a flash, for obvious reasons, and most of the pics turned out like crap. (I would have liked to hang around after the show for something a little more close up, but…no. They had a meet and greet, yes, but you had to be a member of WETA, and boo to them, is all I have to say.)

But…the music was so utterly, utterly brilliant. And truthfully, his eyes were shut for most of the thing.  He’s deeply in love with his Stradivarius. (And being that it’s nearly 300 years old and worth more than $1M, who wouldn’t be?) He genuinely appeared to have very little ego – testament to the fact that he’s so damn good, he’s past the point of needing to prove it.  And I’ll stop gushing here, except to say he’s got the most gorgeous eyelashes I think I’ve seen in a very long time.

One other thing I will say is that he had the microphone attached to the violin, and due to the angle it was at, you could hear him breathe during the slower pieces. It’s not something I was expecting – it’s not something you normally hear on recordings…but it lent a rather strange intimacy to the whole thing. There was nothing hurried about it – but there were times where it almost felt like I’d walked in on something I wasn’t supposed to see. And I don’t know how to explain that. 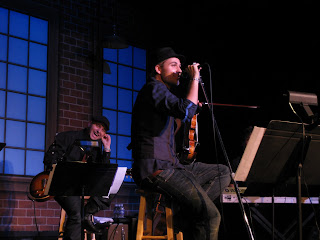 Overall, just a lovely show. Dude wasn’t afraid to get dirty with the music – definitely an excellent fusion of classical and rock type stuff (including covers of Led Zepplin and Metallica, as well as AC/DC). And he managed to put a great spin on the classical pieces as well – some very unique arrangements.

Bad stuff? The one nutty cougar in the center who apparently thought whenever David took the mic to tell us something that he was talking directly to *her*.  So he’d say something and she’d shout something back at him loud enough that everyone could hear. It was annoying.  I have put her in the box with the nutbag from the Tom Jones concert of two years ago who hung out in front of the stage waving her panties in the air. It’s not cute. It’s not funny. It’s pathetic. Please stop.

I have some video too, of varying quality and length, but I have no energy right now to upload them to youtube, so I’ll spare you all until later.  🙂

2 Responses to Fiddle Me Timbers…