So I’m giving up. I’ve tried all the conservative treatments for back pain – the PT, epidural steroid shots, stretches, ice, heat, painkillers, etc. None of them are working and things are getting worse on an almost daily basis. I now have pain running down the outside of my left leg to my ankle about 80% of the time, regardless of whether I’m standing or sitting or what have you.

Is it the worst pain I’ve ever had? No. But it’s constant, so there’s very little relief to be had.

Unfortunately it’s had some pretty detrimental effects on my day to day. It’s very difficult to sit at a desk, for one, but more importantly, I’m not getting much sleep…and I wake up in pain every morning. I can’t pick up my daughter. I can no longer dance. It hurts to drive. I’ve become a tired, angry and sometime vicious person – I snap at my kids, my husband, my extended family. Sort of like that old dog in the corner that just wants to be left alone, I guess.

Stress compounds it for sure – but the pain compounds the stress, so it has become a rather terrible cycle and I don’t seem to be able to break free of it. Frankly, it sucks.

I’ve been through chronic illness before and similar pain cycles, but usually if I avoided the stimulus in question I could get by, or the drugs would take the edge off enough to be able at least stumble through. (And thankfully, I’ve gone into remission in two cases – though I run about 80% on any given day).

The back pain is a new animal all together. So much is driven by it (and duh, it’s not like I can avoid moving, ye ken?), and because there’s an actual physical anomaly involved (one that isn’t getting better), it frustrates me greatly. I’ve been wanting to get back to running, but I’m not allowed to now. Kickboxing is out. (I did it for several years until I got pregnant…I kinda miss it. Nothing quite like a workout that included over 500 situps/500 pushups a class, eh? I had an uppercut to die for.) Debated trying some Irish Dancing classes recently as a dance studio opened up just down the street, but anything high impact is out of the question right now.

So, tomorrow I’m heading off to see a neurosurgeon to discuss my options, which are looking more and more to be something like this. –> https://www.back.com/treatment-surgical-microdiscectomy.html

I’m hoping to get it done as soon as I can arrange the work schedules between me and mr myn. 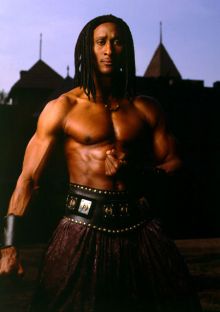 In the meantime, here’s a lovely shot of my kickboxing instructor (He was in the first Mortal Kombat movie…go Hakim!)

This entry was posted in back pain, surgery. Bookmark the permalink.