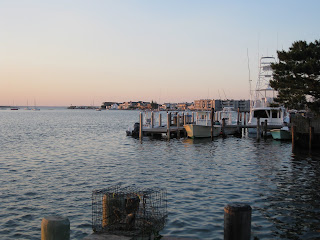 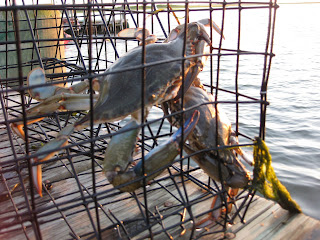 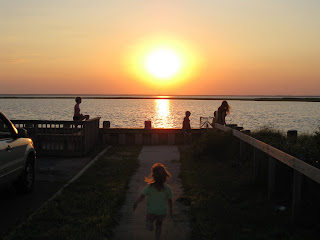 Sunset from last night at the bay (200 yards away?). Really lovely, overall. I’m at the end of the dock there with Connor and Lucy is running just in front the camera. (We were getting our crabs. Between today and last night we had enough for crabcakes before dinner. Or at least mr myn and Pop-pop did. I won’t eat anything that comes from the sea. Sorry. The marine biologist in me is not fond of eating what basically amounts to underwater spiders.)
Today was a sort of iffy day. Weather was gorgeous, so that was fine. My kids, however, were acting up. Tempers were definitely off. Not sure if that’s just us “adjusting” to being on vacation or a combination of stuff (i.e. kids up too late, eating too much crap, etc). Probably a bit of both. Didn’t go unnoticed, however. My father was kind enough to share these lovely limericks that he and his gf shared via Blackberry today. (The first two are from her, the last is from him):
Little Lady Lucy peed on the rug
Musta been scared by some nasty bug.
Lucky Lucy wasn’t on the sofa
Or her wee butt woulda been toasta.
Little Lady Lucy knocked down the lamp
Musta been cause she had a cramp.
Lucky Lucy didn’t get hit
And we hope that lamp will still get lit.
There once were two kids from Manassas
They could be good but surely could sass us
Lucy would cry and Connor would sigh
And maybe they need a good kick in their asses
*cough*
After some of the stunts they both pulled today, I’m inclined to agree. But, they *are* having fun, and that’s mostly what counts, right? Tomorrow it’s supposed to be a bit more rainy, so we may forgo the beach and try one of the local craft places that allows kids to make their own stuff.
We tried to go Bay Village tonight, but between the rain and the kids we didn’t stay long. We did, however, stop by Country Kettle Fudge, which has the best fudge ever. I used to work there, about 20 years ago (Christ, I am *old*). And of course, mr myn had to rub it in that the teenage girls working there now hadn’t even been born yet when I was there.
>_<
This entry was posted in blog. Bookmark the permalink.

One Response to Beach, Day Two