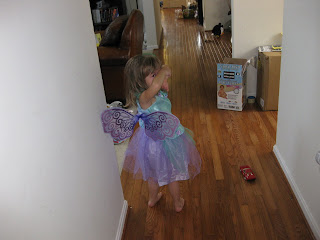 It’s the little things that add up sometimes, I think. Lucy has been running a temp of about 104 for a few days now (and we just got back from the doc’s – all tests thus far are negative for strep, flu, etc, so we’re assuming it’s just a virus at this point). I stayed home with her yesterday, mostly curled up on the couch with her, watching Noggina and eating soup. A fairly quiet day, punctuated only by the fact that the AC decided to die at 5 minutes after 6. Guess when the HVAC company closes? Yes, that would be 6 pm, thanks for playing.

*grumble*
We ended up calling a 24 hour place and for the low, low price of $400 and several hours of waiting, it was fixed. And truthfully, had it just been the AC busted, I would have had us suck it up until today and gotten the regulars to fix it. But it’s been in the upper 90’s here the last few days, and the upstairs was hitting inferno levels of hot. Not good for sick children, (or grumpy parents, LOL.)
Meh. Add to that my back flaring up to semi-unreasonable levels of pain and you’ve got a good idea of how my last few days have been. (Going to the doc’s for a spinal injection in a week – tried to fit it in sooner, but he’s on vacation, go figure).
The only fun thing yesterday was when Lucy was feeling a little better and decided she wanted to wear her faery costume (didn’t want to be photographed, of course). Somehow she figured out that the wings were going to let her fly to the ceiling, so I think she was a tad disappointed in me when I had to explain to her that they were just for show.
*sigh*
Just sign me as Mynfel, crusher of small children’s dreams everywhere.
This entry was posted in faery, Lucy, random. Bookmark the permalink.

One Response to Raining and Pouring