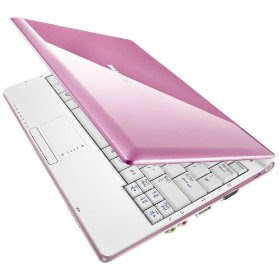 So I bought a netbook today. Kind of a mini laptop – it only has a 10 inch screen, but it does have 2 gigs of memory and 160 gig hard drive. No optical drives, but I’ve got an external cd/dvd drive at home so that’s no big deal. Besides, most of what I need to install on it can be done via thumb drive, external HD or downloaded.

So, why did I buy it? I already have a beast of a computer at home, and I’m certainly no stranger to the gaming laptop (I’ve owned two Alienwares and a Sager so I know of which I speak – all 10 to 13 pounds of them). I’ve been using my work laptop for travel and writing, but it’s on its last legs. Between the fact that it’s nearly 3 years old and all the scripts/big-brother crap the office keeps pushing down on it, it’s pretty much useless. Just booting up uses about 7% of the battery. I maybe got 90 minutes off it during my trip to RT last week…and with my upcoming trip to Canada, it really wouldn’t do so good.
So I thought about it. I will be getting a new work laptop eventually – probably within a few months. I don’t really need another full sized one of my own, but the idea of having a computer I can fit in my purse? Outstanding! Just a little something I can haul around with me, pop open and surf when I want to and write/edit as I need. I don’t need games or 3d rendering or anything extra. Just a word processor and maybe an HTML editor. (Maybe Photoshop if it can swing it). My time is at such an utter premium these days – I need to fit in what I can, wherever I can. Toss in a battery life of about 6 to 8 hours and I think I’ve got a winner.
*cough*
Ask me again on Monday when it gets here, though. Maybe my opinion will have changed.
And for those of you who care, it’s the Samsung NC10-11GP. In pink.
This entry was posted in geek, netbook. Bookmark the permalink.