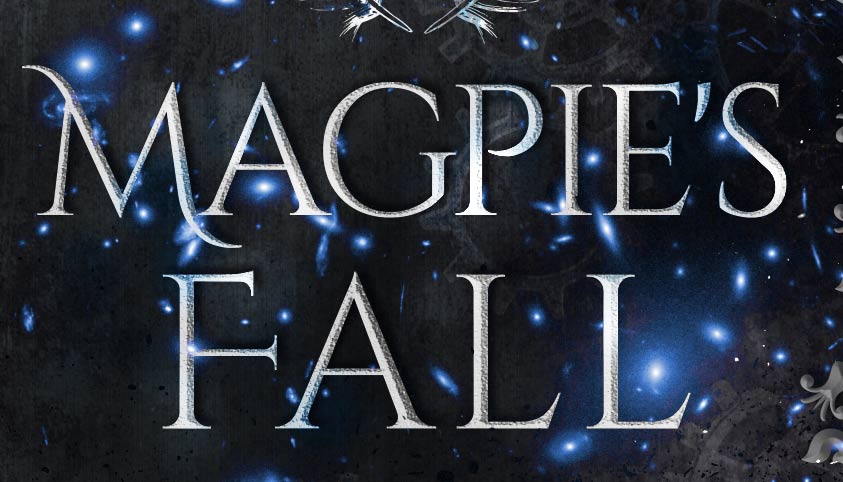 Apologies for the longer radio silence, things have been rather hectic.

And it’s not officially done, but here’s a sneak peek at part of the cover for Magpie’s Fall – I’ll be giving my newsletter peeps a more complete version in a bit once it’s done, but it’s exciting to have things moving on it.

That said, part of my lack of posts and whatnot is because I’ve been busy editing and rewriting the aforementioned book. I was actually fairly unsatisfied with my original draft and after I got my notes back from my editor I ended up reworking the first 150 pages or so and then adding an additional 50. Word count ended up increasing by about 20k initially, but I’ve pared it down some by getting rid of a lot extraneous filler sentences. I always end up with a particular phrase or word and use it to death, so at this point I have a running list of overused phrases that I do searches for when I’m done. I get really picky about word echoes – I hate them so much.

But I finally got those edits done and back off to the editor – there are still copy edits and cold reads to be done, but we’re that much closer to being finished and I think I should be able to get this out in December like I’d planned, so that is quite nice. (Wasn’t sure there for a bit, it took me quite a while to really dig into all those changes – it was a very painful process, but I’m much happier with it now.)

It’s a dark book, though. Probably a bit darker than the first (although hopefully the next one will NOT be as dark, so there is a light at the end of the tunnel.) Suffice it to say, living in an underground mine filled with plague victims does not lend itself to niceties.

I’m officially taking this week off from writing – the last few weeks in particular have been very stressful and it’s taken a toll on some of my pain thresholds. (Plus I want to take advantage of some guilt-free anime binging and some gaming, since I stopped all that during the editing process – just not enough spoons to do it all, as the state of my house can attest, so there’s some hardcore decluttering in store for next weekend also.)

Not that it’s been all work, no play – I did manage to go hiking in the Shenandoah

Mountains one weekend, and I went to the Maryland Renaissance Festival this past weekend, though it was very crowded and full of yellowjackets.

Look, I bought a witchy broom –>

But I’m looking forward to not thinking of much for the remainder of this week – I hardly knew what to do with myself last night, as I’d gotten into the schedule of logging off work and immediately plunging into the manuscript.

I did submit a short story off to an anthology – not sure if it fits the bill though –  it’s one of those stories that gets really nice rejections everywhere, but just doesn’t fit? So we’ll see how it goes this time.

Next week? I’ll be continuing my draft of Magpie’s Flight – no ETA on that, though maybe I’ll be lucky enough to get it out by March/April, though we’ll see.

Oh and here – I’m sure everyone’s already seen this, but it’s awesome, so watch it again!

This entry was posted in blog and tagged breaktime, editing, magpie's fall. Bookmark the permalink.

One Response to Breathing Room