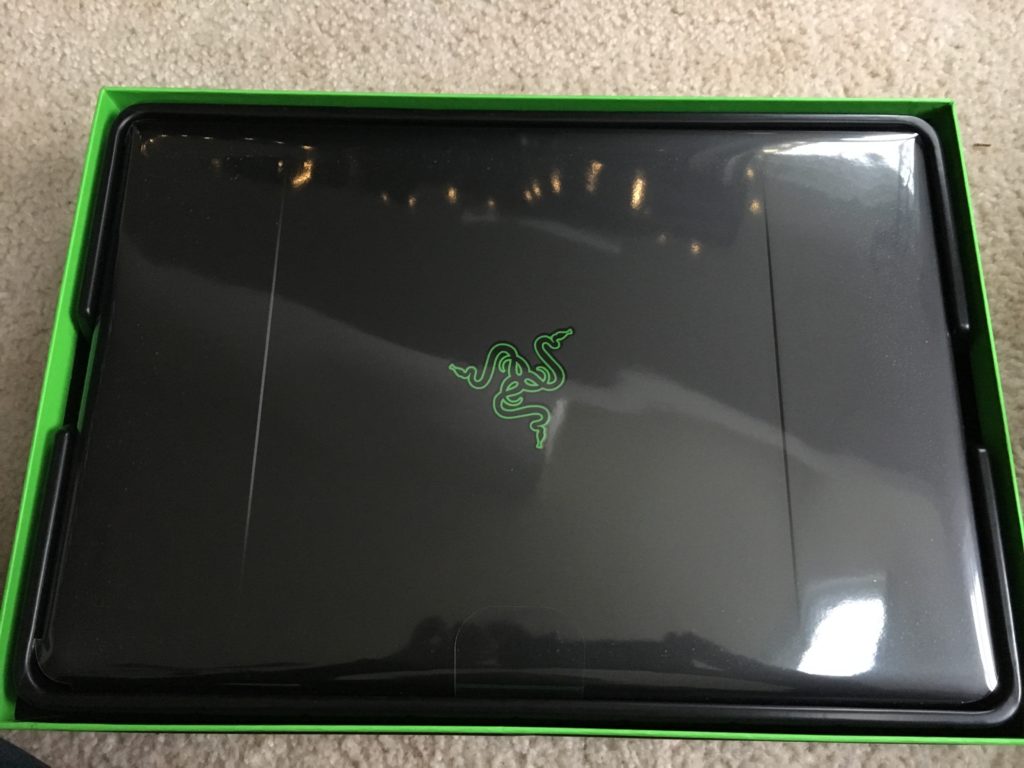 So I ended up buying a new laptop last month. Well, to be honest, I’d ordered it back in March with the assumption I’d receive by the beginning of April.

And it’s not that I buy laptops lightly – my previous one was a pink Sony VAIO – which has lasted me a few years, but a sudden hard drive failure had me looking at OS upgrades and other things. And then I realized Sony had sold that part of their company to a third party in Japan and support is a bit harder to come by, particularly when it came to doing a fresh install.

I got a lot of runarounds and insistence I pay $300 for support. Which doesn’t fly with me – I do IT for a living, my coworkers are hardware people (helped me build my last 2 PCs, the first of which lasted an astounding 5 years before I upgraded it. Astounding for me because I am very, very hard on my computers.)

But the long and short of it was it was an older laptop, it was starting to struggle with my daily tasks, and there wasn’t any real way to update it and no support for it. (Now, I did buy a new hard drive and installed a new OS on it anyway – it still struggles, but at least it runs – it’s basically a travel backup/kid homework machine now.)

In the meantime, I started doing a search for something new. Before, I had only wanted a laptop as a simple writing device. Maybe some light Photoshop, but no gaming and nothing too intensive.

Now…not so much. Having built a monster PC last fall, I haven’t had much time or ability to use it. With new back issues cropping up, I have limited ability to sit in an office chair. I also find myself needing a little more power for Adobe InDesign and other graphically intensive programs. (And really, I don’t like having to work on a machine that is clearly having a tough time – I like things smooth and simple).

At any rate, I started looking at some of the boutique laptops once I realized I wasn’t going to find a standard laptop that had everything I was looking for. (It’s always something – big enough hard drive…but limited in RAM, battery life was shit, etc.) And I’ve owned boutiques in the past – Alienware before they were bought out by Dell, a SAGER that weighed like 13 pounds. At the time they served my needs – even though they were big and loud and heavy, I could play whatever I wanted, do 3D rendering, you name it. Their main limiting factor was upgrading. A hard drive is easy enough, but memory (in those days) was always soldered to the motherboard, etc.) Eventually they just aged out.

These days, I can’t tolerate anything too heavy. (Thanks Fibromyalgia!) I wanted something light and thin but had enough punch to do what I wanted. Which is where the Razer Blade comes in.

I’ve owned Razer products in the past – mice, keyboards, etc – but I’ve never branched into their systems. They are NOT cheap, but from what I can tell it’s a bit like Apple. Yes, you can definitely get more bang for your buck if you’re looking hard enough, but what you’re paying for is the styling as well as the hardware.

Razer had released the Stealth in the beginning of this year – and I nearly got one…but, it had no discrete video card…and only 8 gigs of ram. The idea is that Razer would release something called the Core, which allows you to put in a desktop video card, and then you can run your computer graphics through that. It’s fairly portable, yadda yadda- but it hadn’t been released yet and that 8 gig limit was a no go for me.

So then they started taking pre-orders for the Razer Blade. 512 gig SSD, 16 gigs of RAM, 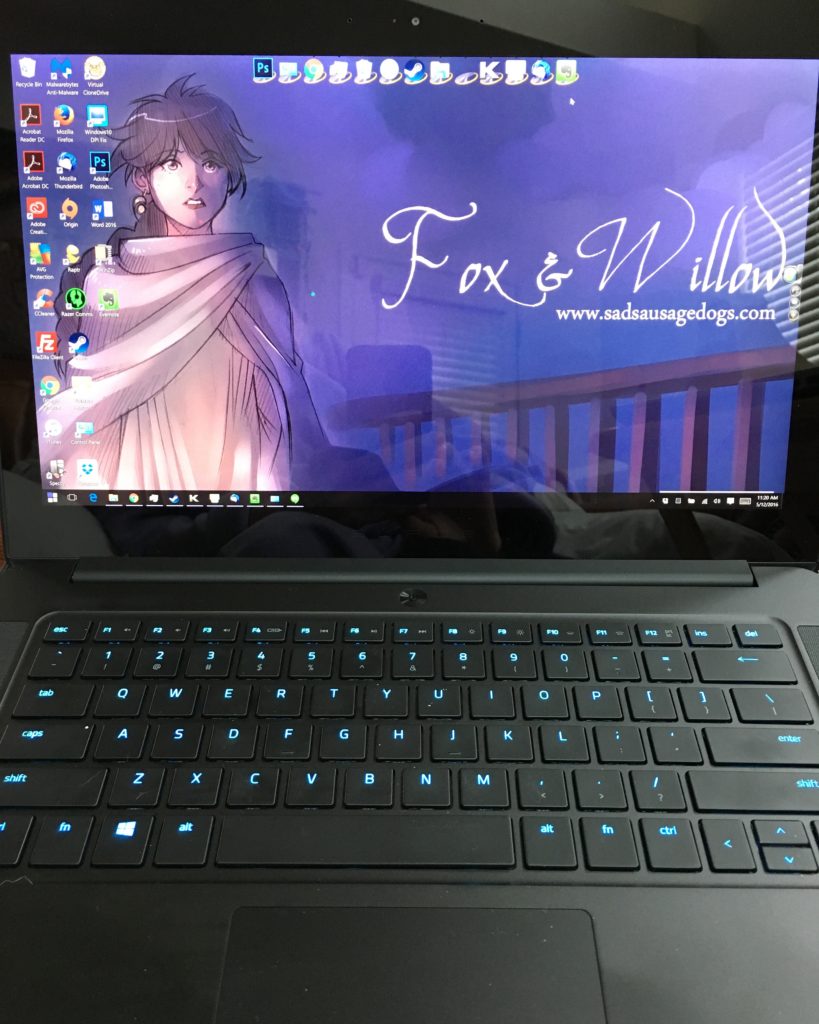 NVidia 970M. QHD touch screen. Light up fancy keyboard that does all kind of Chroma tricks…and only weighs 4 pounds. (And the Core will work with it as well, so now that Pascal is out, you don’t have to worry about upgrading.  Royalty check to cover most of the cost?

Of course, Razer’s customer service being what it is (and it *IS* bad) there were a lot of delays.

I pre-ordered on March 16. Units were supposed to ship starting March 31. Only they didn’t. We got notified of a delay until April 15. And then April 30. And then May 13. And so on.

I have no idea what the malfunction was – there were rumors of Dell needing to update some components that were being used. Issues in Japan preventing parts from being shipped, etc. There was a distinct lack of communication and much gnashing of teeth on the user forums.  Some of us were offered a free case to make up for it. (Glad I got it for free, though – way, WAY overpriced at $50 – it’s not that great.)

Since I still had my VAIO working, waiting wasn’t a big deal for me. I just needed to get it before my next spinal fusion. (Now scheduled for early August, whee.)

But yes, eventually it did get here…and it is *beautiful*.  I’m not going to review components and benchmarks and all that – plenty of other people can do that far better than I. And I don’t like reviewing computers until I’ve had a change to break them in a little, since you never know just what might crop up.

From a speed and efficiency perspective, I have no complaints at all. It’s taken everything I’ve thrown at it. It’s mostly a quiet laptop when I’m just doing basic things on it – gaming gets a little noisy, and the keyboard gets a bit warm, but for a laptop that is like half an inch thick, it’s *amazing*.  (And headphones take care of the noise, so whee.)

My only real concerns are the screen – I’m not a huge fan of glossy screens, but it is growing on me. I could stand to have it be a little brighter, maybe. The resolution is crazy tiny, but I’ve made some adjustments in Windows and now most things seem to be quite readable. The keyboard keys are just a hair shallower than I’d like. As long as my nails are short it shouldn’t be a big deal, but I would have liked a little more give. (And the Chroma stuff is wicked cool – though sometimes distracting if I’m trying to concentrate in the dark – I find it best to put it on a solid color when I need to focus.) Also, fingerprints on this thing are ridiculous. I suspect I will be buying a skin for it at some point.

But all these issues are cosmetic as opposed to functional and I can live with that. (As opposed to the opposite.)

Also I *may* have named it Occam. Because I really am that big of a dork.

This entry was posted in blog and tagged laptop, new toy, not really a review, razer. Bookmark the permalink.