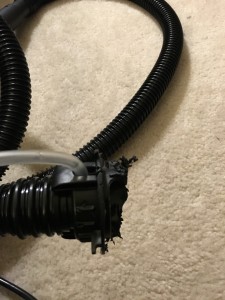 My new carpet cleaner, in fact. I’ve only used it twice, but this time I broke out the attachment to try to do the stairs.

I did this about three days before Christmas when the dog was at daycare.

(The one time I tried to clean the carpets while she was in still the house, she followed along behind me and left dirty footprints everywhere, negating the whole point the exercise. Sort of like the muddy dog equivalent of the Forest God from Princess Mononoke.  You know. The one who makes flowers bloom and die with each step? That’s about what it felt like.

At any rate, I ran through the house, made everything look somewhat better and rested well assuming that they would stay clean for the next week or so.  Long enough for company and holiday shenanigans, at least.

Except the next day the rain started. And didn’t stop for about five days. Which flooded my back yard and resulted in a certain dog digging large slop-filled holes which she…I don’t know. Drank from? Splashed in? All I know is that rain == a bored dog. In and out. In and out. Up and down the stairs. Towels only got me so far – nothing seems to hold mud quite like the space in between a dog’s toes. It’s a sort of black hole from which no dirt can escape. Except on my carpets.

My main point being that all the work I’d done on the carpets was pretty much null and void less than ten hours later. 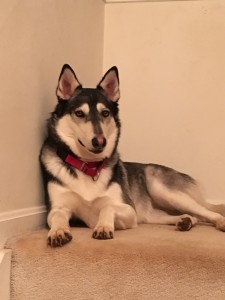 And then the day after Christmas, she ate part of the hose.

The thing is, I had this feeling she would and I’d moved the entire cleaner into the spare bedroom. But we had company and it ended up back out in the hallway. Maggie had a tantrum because no one was paying attention to her (plus we were getting ready to go out and that meant she would be crated, which I’m sure she didn’t want) – and in about thirty seconds the hose was toast.

Of course, by the time I realized that, it was about ten minutes later and there was nothing to be done. You have to catch a dog doing the behavior in order to correct her, otherwise it means nothing.

The good news is I was able to buy a replacement part, though to be honest there’s a part of me that wonders if it’s even worth it. After all, there’s always mud. No matter how many times I clean the carpet, it’s going to get dirty again.

But at least I’ve got the tool to do it, should I be so inclined, and sometimes that makes all the difference.

(There was a point to this post, I think – my brain has been very muddy this past year. I’ve been dealing with a lot of depression, so if you want to take this as a big metaphor for that, that’s probably okay.)

This entry was posted in blog and tagged also me, argh, maggie, mud, never ends. Bookmark the permalink.