We hit the beach again this past weekend. The main reason was to pick my son up from summer camp, but we decided to make a family deal out of it and take Maggie along with us.

Last year she had only been about 3 or 4 months old – and puppies at the beach tend to draw a lot of attention. (Which she loved, by the way – it got to the point where every time we went for a walk  she would drag us to the busiest part of the “downtown” so she could get all the petting she wanted. Quite the diva, miss Maggie.)

Things were a little different this summer. For one thing she is a little older and larger, but more importantly, her attitude has changed. She’s definitely become much more skittish/wary when it comes to strangers. 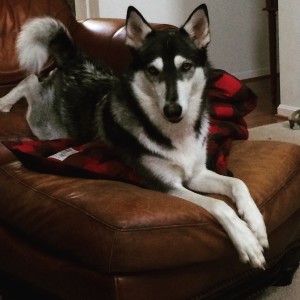 weeks old. She goes go “doggie daycare” 2 to 3 times a week in a lovely facility where she gets a ton of dog socialization – plus the people working there really know dogs. They understand her and they don’t let her get away with anything. She loves them and she loves going there.  I’ve actually got her enrolled in a K-9 nose class on top of everything else to give her additional stimulation.

(A bored Maggie is a destructive Maggie. Exercise and stimulation is the key. Is she good at nosework? Well, yes and no. She can definitely find that birch-scented q-tip. Whether she hits on it or not is another story – mostly because she knows once she finds it, she will be put in her crate so the next dog can have a turn. So…in order to maximize her time outside the crate, she will purposely NOT hit on the scent sometimes. She’s really a bit too smart, honestly.)

But that’s okay. Her nature is what it is and she’s probably never going to be a dog that does things to please anyone but herself. So be it. 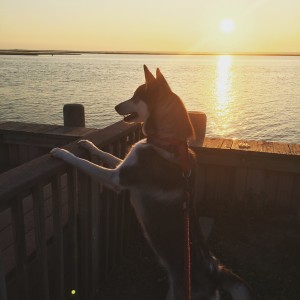 Back to the skittish thing. Again, not sure how much of that is nature vs. nurture. I’ve started carrying dog biscuits with me to help with stranger interaction, but a few points of note from observations this weekend.

A lot more people are now asking if they can pet my dog – I’m thrilled that they are asking as opposed to just doing it. When she gets overstimulated, I try to avoid that level of interaction and this way I have the opportunity to let people know now is not a good time.

However, if you’re going to ask, please don’t get offended when I tell you no. I had several people come right into my space and then look confused/upset when I declined. I think a lot of people just assume the asking is a formality.

I can read my dog – I know when she’s had enough of people pawing at her. (She’s usually

friendly, but she definitely has limits, and those need to be respected. I’m not saying “no” to be an asshole – my dog is scared/uncertain of you right now and unless you’re someone that’s going to be interacting with me/her on a regular basis, just keep on walking, yo.)

That being said, I’ve noticed she tends to be much friendlier if the stranger also has a dog. I’ve seen her literally roll right down on her belly and wiggle her way in the grass to get to the owner, just as submissive as you please – I’m not sure what her mentality is other than assuming if they have a dog, well, they must be good people.

In general, if she approaches a person on her own terms, things seem to be much better. It’s when people she doesn’t know start walking toward her, hand outstretched and above her head, staring in her eyes, etc that she begins to panic – usually by backing up and barking. She’s scared of you. That should be all the warning you need not to press the issue.

And also, just a general tip to people – if you’re walking in a crowded area and someone has a dog walking close by, don’t just whip your hand out to pat it on the head as you’re passing, especially if you’re coming up from behind. This sounds like common sense, but it happens ALL the time. Not all dogs are cool with being startled like that.

Also, also – several times I’ve been driving with Maggie (her head out the window, etc) and stopped at a stoplight and I’ve had people in cars pull up beside us and CALL to her, encouraging her to jump into their car. Who does this??

Anyway, just a little rant that not all dogs like being patted by strangers. Just like not all dogs like other dogs, or children or men or whatever. We don’t expect people to like everyone they meet (and we sure don’t expect cats to like anyone at all, really). Man’s best friend aside, dogs are individuals and should be treated as such.

This entry was posted in blog and tagged dog etiquette, maggie. Bookmark the permalink.

One Response to Dog Days