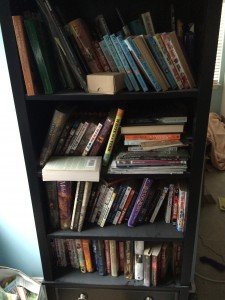 We had a pretty low key Easter weekend – to be honest, most of Spring Break week was pretty low key, mostly to try to recover from the previous two weeks and their bit of ensuing madness. It was the first holiday in a while where we didn’t have to go anywhere or entertain anyone, and it was nice not to have that level of pressure on top of anything else.

One of the things I *did* start this past weekend was the beginnings of a clutter dump.

Clutter is hard for me. I’m a packrat by nature, and so is the DH – so our house is full of things that we shove into a corner or a shelf “just in case.”

Which is fine, except that “just in case” almost never actually comes. Which lends itself to more piles, more boxes full of crap to be put into storage, more cabinets full of useless knickknacks or gifts that we feel too guilty about getting rid of.

I’ve seen it posited that creative sorts tend to be cluttery by design – that our brains thrive on chaos. That may be true to a point and maybe it works if other family members are able and willing to pick up – but it’s a bit more difficult if everyone in the household is ambivalent about it.

And usually, I do enough to get by – but the last few weeks everything pretty much fell 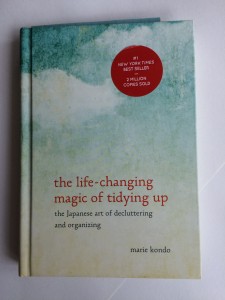 apart and even I have my limits. So I decided to try something a little different this time. Instead of attempting do each room on its own, or buying more storage space (more shelves, more bins, more shit!) I picked up a copy of the life-changing magic of tidying up by Marie Kondo.

Now, it’s an interesting read on its own right, and there’s definitely a Japaense flare in her descriptions, but it’s pretty charming from an auto-biographical point of view.

That being said, I’m not sure I could take things to quite the same extreme that she indicates one should do, but I figured the concepts were worth taking a look at.

The  main premise of her method is to determine if something brings you joy. If it doesn’t (and it’s not necessary, like a bill or important paper or whatever) – it’s gone. Trash it, donate it, whatever. 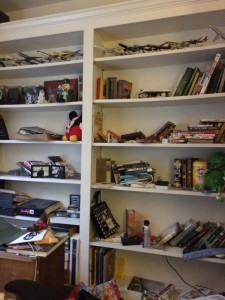 Ideally, you’re supposed to break things down into five types – clothes, books, papers, miscellaneous and sentimental items. And instead of going room to room, you do ALL of that one type in one go. So ALL the clothes come out and you look at each item and remove it or keep it based on the joy aspect. (Brutal honesty required. Haven’t worn it in 3 years? Probably never going to.)

I actually started with books. I don’t have a huge amount of clothes and while I am going to go through them, my restlessness this past weekend was mainly focused on the mess that was my office, so books became my target. (I was fretting about one of the stories I’m working on. When I fret, I tend to channel that into cleaning, but at that point I was just drowning in the mess and I couldn’t even determine where I should start.)

Books are very hard for me to get rid of, by the way.  The above picture is the “after” image – that entire set of shelves was completely packed and it’s obviously still a mess, but part of this method means you don’t actually put things back until you’ve gone through EVERY book in the house.  And I still have 2 standing shelves that are double and triple stacked, and at least one additional large shelf…and that’s just MY books. Doesn’t count the kids’ books, or the piles of others laying around 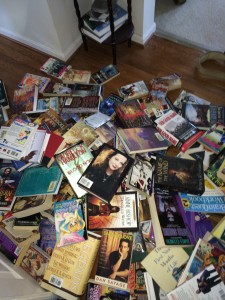 But books, man. I’ve been a reader for forever and it is SO hard to go through them and decide if a book brings me joy. They *all* bring me joy, so how do you figure that out?

In some cases, it’s easy enough – I’ve got duplicates, or they’re on my Kindle. Some are research books – on particular writing topics, or reference guides that I’d like to have close at hand.  If they’re books I’ve read multiple times and I’ll definitely read again? No worries.

But what about the books, I read and liked, but will probably never read again? (Books I didn’t like are easy too, obviously.) And then I’ve got a ton of books that I haven’t read, or started and never finished and will probably never get to.  Those are probably the hardest, because they’re potential favorites. 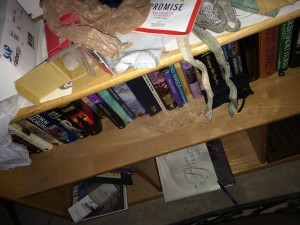 But objectively, some of those books have been on my shelves for ten years or more. When I had more time to read, it probably wouldn’t have been an issue, but now? I don’t know. Plus ebooks are more my style these days. There’s no real limit to what I can have on me at any given time and I don’t have to haul them around.

So, into the donate pile they went.

I’m having a few second thoughts here and there, but I’m still going to go through and pull out the rest of my books and see what I’m left with.

This particular method isn’t fast, by the way – it usually takes a good six months to get through everything (and it looks like a bomb went off in the office now, but growth is painful and messy and ugly, so…) I’m really hoping that it will be worth it in the end – and maybe the organization side will start bleeding into other parts of my life too.

This entry was posted in blog and tagged books, cleaning, organization, such a mess. Bookmark the permalink.