Notes of a Dubious Nature 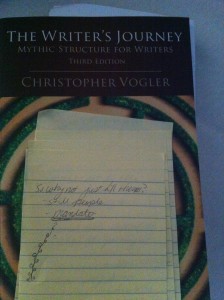 I was cleaning up a little bit the other day and it occurred to me that family members of writers probably stumble on some pretty weird things.

Most writers I know have been asked the “Are you all right?” question when said writer is staring off into space. I do this a lot – and usually it’s because I’m writing in my head. Or playing out a scene between characters or whatever.

(Hmmm. What happens if I just make everyone naked?? Bet that ping-pong tournament gets way more interesting.)

It’s fairly common phenomenon, as are the google searches for things like how long takes someone to die after they’ve been run through with a sword.

Writers can be very scary people, yo.

I rarely write things down on paper – except when I get stuck. For this latest book, I’ve been writing things down like mad – which should probably tell you something about how much of a struggle it’s been. But sometimes jotting down ideas and questions frees thoughts up.

Like this lovely note in the picture. It says “So why not just kill them?” Followed by “Still people.” and “Mandate.”  Which makes perfect sense to me, but considering the note is sitting on a book on my nightstand, I imagine if the DH rolled over and saw that (or the kids, even)  – it might be a bit alarming.

(Incidentally, the book those notes are on is The Writer’s Journey: Mythic Structure for Writers by Christopher Vogler – rather relevant to my interests for this new story, and really well done if you’re into working with archetypes and the Hero’s journey.)

Lucky for me, the DH is pretty used to fielding odd brainstorming sessions at strange hours of the night, so seeing a note like that doesn’t faze him in the slightest. (Being law enforcement means he also gets to deal with all sorts of police procedure inquiries, none of which have actually made it into a book yet. But you never know. *cough*)

This entry was posted in blog and tagged authorly stuff, writing life. Bookmark the permalink.

2 Responses to Notes of a Dubious Nature