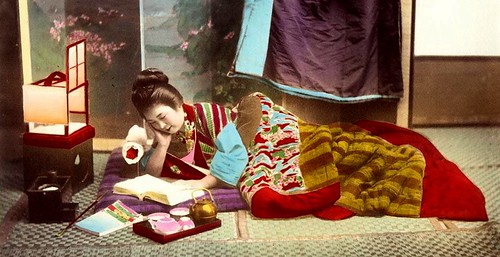 It’s been a few years since I’ve seen/read it, but in Memoirs of a Geisha there was a scene where Saiyuri, the Geisha in training, goes from tea house to tea house to try to boost her status. Of course her rival found out and it became a constant game of cat and mouse. As one showed up, the other one would leave.

Neither here nor there, except to say that an author on a blog tour is much the same. Not about the rival part, just that sometimes it feels like I’m constantly shuffling  from blog to blog. A guest post here, an interview there, giveaways and promo and smiles everywhere.

Which is awesome – but not with my boss sitting catty corner to me in cubelandia.

I’m actually taking next Tuesday off since I’ve got so many things going on. I was at the day job during my debut release last year and while it was great getting flowers and phone calls all day, I know it was a major distraction for my coworkers. And really, if I’m tweeting and doing the social networking thing hardcore, I’m not working. (And my day job is very supportive of my writing…but if a server goes down, I can’t exactly be all like – “Well, I’ll get to it later. I’m on a live chat right now!”)

So to eliminate that point of stress I’m just going to remove the work part out of the equation. I’ll still be super busy, but at least I’ll be able to focus on the book stuff.

Hope to see you there. 🙂

This entry was posted in blog, drowning in stuff to do, metaphoric crap that is supposed to mean something deep but probably doesn't, release day coming. Bookmark the permalink.

One Response to Every Day I’m Shuffling…