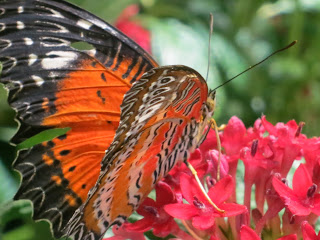 I went to the Museum of Natural History in DC yesterday. Nothing major. Just a day alone with mr myn (which culminated in a feast of gut-busting proportions over at The Melting Pot.  You can never have enough cheese. Or chocolate.)

Anyway, one of the new things over at the museum is you can pay a few extra bucks and go wander around in their butterfly house. It’s not super huge, but there’s a moment of enchantment to be had there. I mean, I’m sure most of us have seen butterflies before, but it was a nice change of pace for midwinter, and fun to just be surrounded by them. 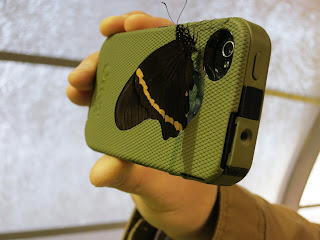 And they were *everywhere*. They landed on your hair or your clothes, your phone, the wall, the floor, whatever. (As you can see by the pictures I’m tossing up here – I finally got a new camera, so that was nice. I couldn’t get many action shots, though – they just moved too fast for me to get anything but blurs.)

Anyway, the species were all common sorts of butterflies, so there was no worry that you might accidentally tread on somethings super-exotic and rare. And in one corner there was a stand with hundreds and hundreds of lined up chrysalises. (They all come from butterfly farmers, apparently.) 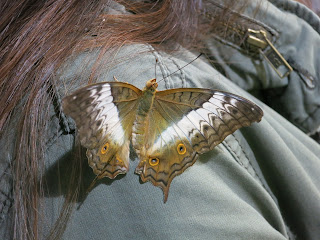 And it makes sense. After all, butterfly life spans aren’t particularly long anyway, but there’s an odd part of me that wonders if the butterflies know they’re going to be replaced.

So then I got to thinking about the upcoming book release and all the usual hubbub of coming up with ways of marketing and what works or what doesn’t work. And I suppose the whole thing  is like the butterflies.

They’re all so new and pretty and perfect at first, but after a while their wings start to tear. They bump into things or get stepped on. (Or maybe they’re playing butterfly Rugby at night. Who knows?) 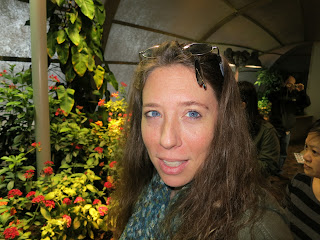 Some butterflies play it coy and avoid everyone. Others dart in your face – and actually land on it. Some are always moving, and some are just hanging out on the rotting bananas and watching the world go by.

But sooner or later, they’re going to die and be forgotten, and the next crop of new and exciting butterflies arrives.

It’s a bit like publishing, really. (At least for the mid-list.) We’re all just thrown on the shelves, and it is up to us as the authors to decide how we’re going to catch the attention of readers…and how we keep it. Do we just do our thing with minimal marketing? (Here’s the cover boys. Nice and pretty. Now if you excuse me, I’ve got writing to do, nectar to eat.) 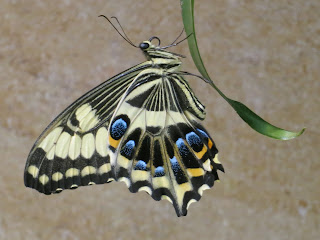 Do we slam ourselves in reader’s faces? Buy me! Look at me! Buy me! (And you know, frankly, it’s cute for a few minutes, but dude. GTFO of my hair, k? Your nasty-been-walking-on-rotting-banana-feet are in my eyebrows. Sorta like people on twitter who just make tweet after tweet after tweet about their books. Enough already. I get it, you have a book for sale. So do I.)

Do we completely avoid all of it? Go up super high and ignore everyone and everything? Flash enough author thigh to maybe catch reader attention and then act like everyone is beneath us? Create some odd bit of fake mystique? 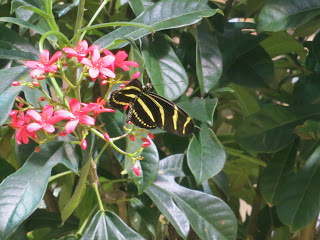 And all the while, we know we have such a limited time frame to do this in. The publishers have rows upon rows of other new releases coming up, new debut authors…and of course their own stable of best-sellers. (AKA the exotics – who get their own room somewhere else, eating off of bananas soaked in champagne and studied by the professional entomologists instead of being fingered by the unwashed masses. And that’s tongue-in-cheek, of course, but some days it feels like that, particularly when it comes to in-house marketing.)

And really, there’s no reason why a mid-lister can’t become an exotic butterfly – we hold much of that in our own hands, whatever path we choose to take. And for all my bitching, I’m still grateful I’ve got the chance to have anyone bother to look at me at all.

Badly made Lepidoptera metaphors aside, it *was* a fun afternoon.

This entry was posted in blog, butterflies, metaphoric crap that is supposed to mean something deep but probably doesn't, publishing. Bookmark the permalink.