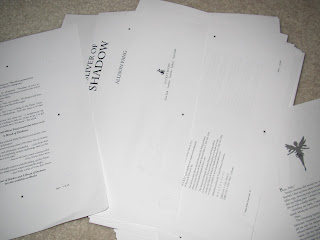 So the first pass pages for A Sliver of Shadow came in yesterday. (I arranged them in a nice pile there for the picture, simply because that’s what my thought process looks like, at the moment. BLARGH)

For those of you who might not be aware, FPP are when the publisher sends you a print-out of the book – essentially an unbound galley. It’s typeset so you can see how everything will be laid out in the final printing. (There’s a nice Holy Crap! I’ve written a book! moment in there too…)

It’s an author’s last chance to read it and make (small) changes. Typos, continuity mistakes, remove a sentence, add a sentence – but as a whole, the book is officially done.  (Although someone needs to look at the layout of page 61 – wow is it ever gorked up. Don’t know if it’s a printer error or setup error, but the text on two pages is overwriting itself…yikes.)

Incidentally, you’ll hear that authors don’t usually read their own books very often. This sort of thing is why – not only did I write it, I rewrote it. And edited it. And edited it. And went through the copyedits. And now I’ve got the FPP. By the time I’m done with a book, I’ve probably read it in its entirety at least 25 times or more. (I’d guess more…but I don’t really keep track.)

But it’s hard to retain enthusiasm about it sometimes. When you’re editing you become so hyper-focused on flaws (real or perceived) that it’s very easy to lose perspective on the work as a whole. By the end you’re convinced that every word you’ve put on the page is crap. And if you were a “real” writer, everything would be good and you wouldn’t make such stupid mistakes and OMG did I *really* use “turgid magnificence” to describe an erect penis? And how did I go from 6PM at night to eating breakfast in the early morning light within two paragraphs? And wow is that Portal joke super ass lame, and no one is going to get it, and if they do they’re gonna think you’re the biggest geek on the planet.

So says the inner critic, anyway.

But getting a chance to read it again on the FPP seems to put it under a slightly less harsh eye. For me, it “looks” like a book now – and it starts to read like one, too. It’s not just a collection of paragraphs in a Word doc – and sometimes that perception is what makes all the difference. The true test is if I start reading it…and I forget that I actually wrote it. When I actually attempt to lose myself in the story and not in the tiny cogs of what make the story up. That part is finished – there is no going back.

And sure, sometimes there is a wince or two…”Hmm, probably would have done *that* bit over again if I had the chance.” But more often than not, there are actually moments of wonder that I managed to get certain parts so very, very right.

This entry was posted in blog and tagged editing, first pass pages, sliver of shadow. Bookmark the permalink.

One Response to A Sliver of Shadow: First Pass Pages