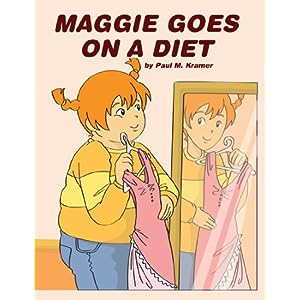 Okay, while I get that there’s an obesity issue with kids and people in general in the US, can I just say how much I despise the concept of this self-published book?

“This book is about a 14 year old girl who goes on a diet and is transformed from being extremely overweight and insecure to a normal sized girl who becomes the school soccer star. Through time, exercise and hard work, Maggie becomes more and more confident and develops a positive self image.”

Okay. All well and good. You know. Except for that whole “NORMAL SIZED” thing.

And the fact that it’s marketed for readers age six and up.

I want to chuck my computer out the window right now. I’m all for being active and having self-confidence, but Jesus. I don’t think first graders need to feel like shit because they aren’t skinny enough. My daughter is five. She weighs 35 pounds. She is a TWIG. And she is already looking at her backside and asking me if I think she looks fat.

This shit starts so early.

We have enough problems with little girls being oversexualized in this country, let alone needing one more piece of literature placing the entirety of their self-value on how much they weigh.

This entry was posted in blog, wtf. Bookmark the permalink.