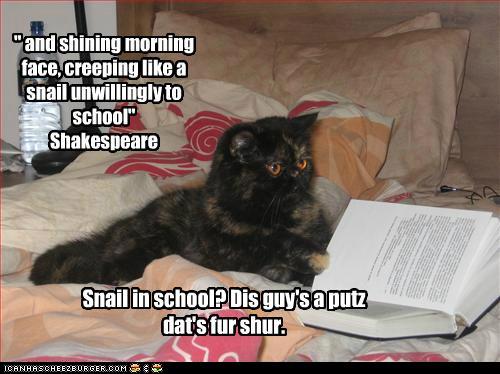 Just ’cause I feel like posting a bit. It’s super rough. Bear with me.

“What was that you were saying yesterday about a Denny’s?” I sniffed at the jerky, my nose wrinkling as the scent of rotting meat hit me in the face. “I didn’t think this stuff went bad.”

I froze, the hairs on the back of my neck standing on end. I swallowed against the gag reflex as the necrotic odor grew stronger. My eyes watered as though I’d bit into an onion.

Slowly, I turned my head to catch a glimpse of a bulbous, blue skinned face, set off by tiny eyes and massive pointed ears. A draping of furs hung over the creature’s waist, a fact for which I was terribly grateful. I had *no* desire to see what it looked like in the buff.

Of course the fact that said blue person only came to waist high on me did play into my assessment. “It’s like an oversized Smurf,” I muttered, trying not flinch when it poked an inquiring finger at my thigh.

“That’s a youngling. Mommy dearest is behind you.”

Whirling as the sun was momentarily blotted out, I took a step back, my head craning upward.

“Ah,” I said cleverly. The mother troll stood a good eight feet or so, but instead of the shapeless flabby mass of her apparent offspring, this one was built like a weight-lifter of Arnold proportions.“Guess goat-herding keeps you in better shape than I thought.”

The troll woman stared at me impassively when her child moved to tug at my shirt. This time I stood still, unsure of how I was supposed to react. A sudden squalling sound had me ducking even as the jerky was yanked out of my hands and shoveled into the little creature’s maw. I caught a glimpse of moss colored teeth before what was left of my breakfast disappeared.

“Lovely.” I sighed when it pawed at me again. “I thought Talivar said we wouldn’t run into these guys.”

*Probably* wouldn’t,” Phineas pointed out. “And she’s got her cub with her…and oh, yes, there they are.” He sighed as a cluster of little goats appeared as the troll woman yanked on a woven cord. They looked a bit less than thrilled at this, but then they *were* being dragged behind something that smelled like the love child of boiled leather and a corpse.

“Hellloooo ladies.” The unicorn arched his neck coyly, making a little humph in the back of his throat when they ignored him. “Lose your horn and you lose everything,” he pouted.

Apparently having decided I wasn’t any sort of threat, the troll gestured at her son to follow her, her gaze suddenly falling on where Phineas still sat. Her eyes became sly and she pointed at him and then jabbered something at me. I frowned at her.

“He’s not for sale,” I said slowly, trying to guess at her meaning.

“She doesn’t want to buy me,” Phineas said, his tone frosty. “She wants to…breed…me. Apparently she lost her billy goat a few days ago and without him, her stock will…dwindle.”

My mouth pursed despite myself. “So what’s the problem? You were just ogling the nannies a second ago, right?”

“What I do on my own time is my own business,” he sniffed. “Being sold for my services is demeaning.”

“But being a man-whore to goats isn’t?” I rolled my eyes at him, but shook my head at the troll. “I’m sorry but he’s not currently up to the task.” I held out a stiff finger and let it fall with a little struggle, ignoring the outraged squeal behind me.

The troll woman bared her teeth at me in what I think was a smile, her next movement suggestive of eating him.

Clearly nothing went to waste in troll country.

“I’m fatting him up first,” I assured her, holding my arms out to the side and rubbing my belly. This seemed to please her well enough. She grunted again and started back toward the shelter of the trees, the goats trotting behind her in a parade of caprine misery. The troll child gave me a last poke, his mouth curving into a truly dreadful grimace. “Right back at you,” I murmured, digging the remainder of the jerky out of the saddle bags to hand it to him.

He let out a groan of pleasure and stuffed it into his mouth before stumping off behind the goats, his bare feet leaving behind a trail of broken shrubs. I sank down next to Phin and sighed. “Well, that was interesting.” There was no answer from the unicorn but a second later a burning pain shot through my backside.

“Jesus, what the hell was *that* for?” I hissed, rubbing the bite vigorously. “I’m only wearing linen trousers, asshole.”

“Fine. Whatever.” I headed back to the lean-to under the assumption of trying to break it down, glancing up at the sky as I did so. Seemed silly since I couldn’t exactly tell time by the sun, but as options went it was better than staring at my feet.

Lousy place to end it, but there you go. Poor Phin. 🙁

This entry was posted in blog and tagged bod3, phineas, rough, wip. Bookmark the permalink.

4 Responses to Brush of Darkness 3 Scene