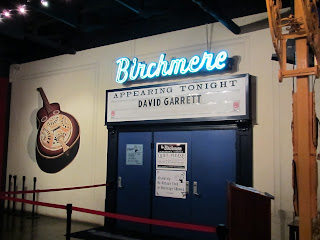 I realized last night that there’s been a dearth of meaningful blog posts on my site recently. I’m sure some of that can be excused – I will admit that I’ve got a bit of blog post burnout, but in counting it up, I’ve had nearly 30 guest posts or interviews that have gone up in the last 30 days, not counting the extra posts from Word Whores or the League of Reluctant Adults.

And I’ve still got a few left to do, but the initial onslaught is over.

And this is not a whining post at all. Just a statement of fact brought on by some of the experiences I had yesterday.

For those of you who follow me, you know I went to the David Garrett concert last night. I met so many friends from around the country that I had only known online. Gifts were given. (I got hedgehog salt and pepper shakers, y’all. Win) Books were signed. (Yes, I guess I just had my first signing. At the Birchmere, of all places. A nice fat pile of the things, in fact. I was stared at. It was brilliant. 🙂 ) 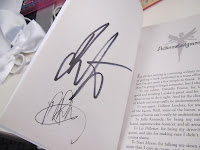 I got a picture with David. I got my book signed by David. His handler said he would read it on the bus that night, so that’s something. “Is your contact info in here? Good. We’ll be in touch.” 🙂

I also had the opportunity to get on the tour bus. I haven’t been overly open with the fact that I have done some web design work for Marcus Wolf, who is the guitarist for DG.

At any rate, in thanks for the work I’ve done, I did get the chance to hang out with Marcus for a bit before and after the show (and of course, I gave him a copy of my book as well.) Marcus, by the way, is utterly brilliant – laid back and friendly and just a really nice guy. We talked about music and yoga and some other things that I’m not going to disclose. Nothing major, just nothing I want to share. He gave me a bottle of Perrier (which I still have. I have visions of pasting a picture of Marcus’s face on it and just making it an office mascot. I suspect I will.)

I did not take pictures on the bus. I dunno. It was a rather surreal experience and I didn’t want to ruin it. And I sort of figure that the tour bus is a bit like a house. It’s rude to go into someone’s house and start flash bulbing it.

At any rate, we ran into David as we left the bus, and I got a lovely personal introduction…but I will admit that David seemed a little tired. Without the presence of the stage and the music, it was much easier to see him as a regular person – call it a stripping of that outward celebrity persona, I guess. Out of respect, I’m not going to get into much more detail than that.

Marcus mentioned that they’ve done something like 27 shows in 30 days. Which is  insane. I imagine my little blog tour example up above pales in comparison, but in some ways I imagine it’s similar. (Well, except that I don’t travel all over the damn world. But he doesn’t have a poop covered hedgehog wheel to clean. Apples and oranges, I guess.  Everyone has their own burdens to bear and blah blah blah fishcakes.) Mental weariness isn’t limited to people in the spotlight. 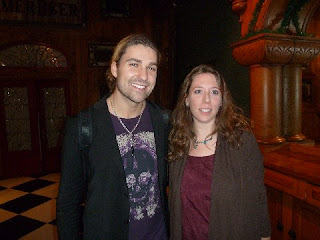 <– And there I am. Too bad I wasn’t actually looking at the mothereffing camera. I’m actually rather pleased that I photographed okay otherwise though.

This entry was posted in awesomesauce, blog, david garrett. Bookmark the permalink.