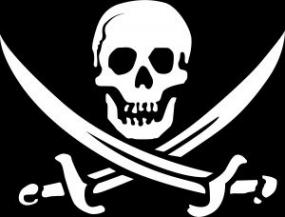 So I woke up to my inbox this morning with at least seven different google alerts with links to my book for download on pirate/torrent sites. Clicking on one link had me downloading a file and about two minutes later I had my book in five different e-formats and ready to go. Which is rather ironic, since my book is still only available on the Kindle and the Nook. (Still waiting to find out what happened to the rest of the e-reader feeds.)

Admittedly, seven isn’t very many…yet. I suppose I could argue that I’ve officially “made it” if people are already stealing it. Although, it’s rather disheartening to look at my blog stats and see people coming to my websites specifically searching for Brush of Darkness downloads. (Of course, now I have their IP addresses, for all the good that does me.)

Which is to say, it doesn’t. Sure, I can start the long process of the DMCA takedowns or I can allow my publisher to do it. Of course, I can’t actually attempt to do any of this from work, since most of these pirate sites are blocked (go figure). And it’s not as easy as just linking to a pirate site or forum. I’m going to have to make a fake account to get into the forum to get the link to the fileshare or whatever. (One more account to keep track of, whee.) And torrents are probably not even worth the effort. After all, it’s the tracker that’s the issue, and if the tracker is out there in Denmark or Romania or whatever, it’s unlikely they’ll care.

But we’ll see.  I have to say it’s sort of funny to read some of the comments in at least one of the forums, asking if BoD is the start of a series and if there will be more. I’d much rather have a reader ask me directly, since the thing is – if I don’t earn out on my first book or so, then no, there won’t be anymore.

Anyway, there are differing points of view on whether e-piracy really does affect sales or not. A couple of excellent articles listed here:

Against: Deadline Dames
For: JAKonrath

From the Pirate’s Perspective: The Millions (and dude, the amount of work this guy puts into his scans is unreal. I can’t believe that 4 or 5 hours of scanning and cleaning is worth the effort, but hey, more power to him, I guess.)

This entry was posted in blog and tagged pirates. Bookmark the permalink.

3 Responses to Belay That