Trimming Trees and Such 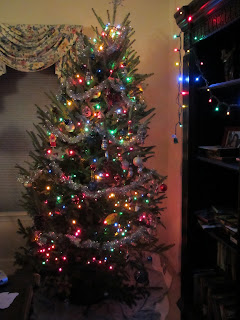 Our tree is crooked this year. Not overly so, but no matter what angle we put it it at there is always a bit of a slant. Straighten the top and the bottom goes lopsided. Straighten the bottom and the top bends backwards. Much like life, I suppose.

In the end we just put it up and decorated it anyway, crooked limbs be damned. I doubt Santa will care one way or the other. (The kids surely don’t.).

At any rate, it’s up now and ready to go. It’s strange, though. For all that I’m really pretty jaded about the holidays in general (not that I really want to be, mind.), I always insist on a Christmas tree. And not a fake one either. My parents did get a fake one after my brother and I moved out, but growing up we always had a real one – and a few times we even got ones with roots and we planted them afterwards. (Sore point much later on, driving past our old house and seeing that the new owners had ripped them up.)

I don’t know why, exactly, but I guess for me the season is so commercialized and overblown most of the time hat the whole tree thing becomes a bit of a grounding ritual. I was rather touched by Jeffe’s post on her tree decorating the other day  because it’s very much the same for me. Each of the “special” ornaments holds a memory – even if it’s not one I think about all the time, it can still be a very great comfort to use it as a focus of happier times. (And sometimes not-so-happy times, but still.)

My mother was a school teacher until a few months before she died, but every year she would bring home a bundle of little gifts from her students on Christmas Eve (or the day before).  Many of these were homemade ornaments. We’d go through each one and put them on the tree (at least for that year.) Not all of them would be keepers, but we’d at least give them each a chance for the one year.

One in particular was a half-assed little ornament where the student had essentially chopped off the head of a small stuffed bear and glued fake holly leaves underneath. My mother was a little weirded out, but I insisted we keep it…and gave it the name of “Bear Head”. (And once you name something, it’s yours…*cough*) Of course, mom would always try to hide it in the back – even after ten years it continued to freak her out, but I always moved it up front and center- because you just can’t beat a decapitated bear head for Christmas. (I don’t have a picture of it, alas – it still has a home on my father’s tree at the moment, but perhaps one day I will inherit it.) 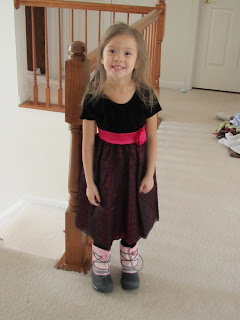 Apropos of nothing, but Lucy has her little Christmas concert this afternoon and she was rather proud of her new dress this morning. (The boots aren’t technically part of the ensemble, but it’s still a bit snowy out, atm.) –>

4 Responses to Trimming Trees and Such