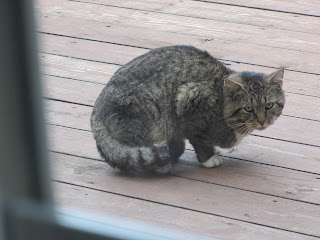 My two main cats, Killian and Jake, are primarily outdoors these days, but in the fall and winter months I let them in at night when the temp starts dropping. (And being that Killian is nearly 15 years old now, I suspect he’s going to be spending more time indoors in general – I feed him separately indoors most of the time now as it is to make sure he gets enough.)

Of course, over the years we’ve had many cats come by and nibble on the leftovers. Some are just passing through and are clearly pets. Some are strays and some are feral. We had one stray, dubbed “Spots” who showed up nearly two years ago with a broken tail and very skinny. She’s pretty fat now and very gentle. (I let her in during the massive snow storms last year for several weeks.) Sadly enough I haven’t seen her for about a week now – I’m hoping she’s moved on and found a family that took her in permanently.

And then there’s “Falcon,” the kitty up there in the picture. He showed up during the big snowstorm last year, but wouldn’t let us near him. He may have been injured at that time, but he only would come up to eat when  it was dark so I couldn’t get a very good look at him. 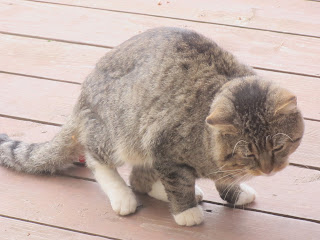 Over the summer he’s been a bit more bold. He’s still the lowest cat on the chain and waits until the others are done before moving in, but sometimes he lazes about our deck instead of bolting – until he sees us watching him or if one of us makes too sudden a move inside the house, at which point he retreats beneath the deck.

Unfortunately, I suspect Falcon has recently been struck by a car. His right hind leg can’t bear weight and his head is now perpetually cocked to the right side.  I don’t see any outward signs of trauma -i.e. road rash or bleeding. However, he’s still coming up to the house to eat voraciously and is taking shelter in the insulated cat house on the deck (or under it sometimes.)  He still won’t let us near him. 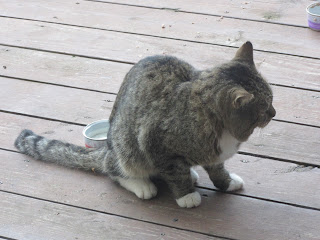 Animal Control will take him, but I suspect he’ll be put down rather quickly (and poor Connor is heartbroken about that.) I dug out my Havaheart trap from the garage last night and set it in the hopes that I might at least get him to a vet for an evaluation. Even if I end up putting him down, I’d rather just do it personally than have him lost in the faceless rows of shelter cages. My bigger concern is that even if he’s “fixable”, I don’t know if I have the money to spend…and more concerning, if he requires medication, I have no idea how I’d be able to give it to him. I’ve called several shelters and the long and short of it is there just isn’t any room anywhere for an injured feral cat.

At any rate, I put the trap out last night and watched him limp around it in the dusk. He really wanted that food and eventually he walked part way into the trap, but retreated before it could close and then disappeared into the darkness. I chased off my resident possum twice, but as of this morning Falcon wasn’t captured and the trap wasn’t sprung. The entire can of cat food was gone, however (including the can), so my mind is boggling a little bit on that one.

I suppose I’ll keep trying for a while and hope for the best outcome, whatever that may be.

This entry was posted in cats. Bookmark the permalink.