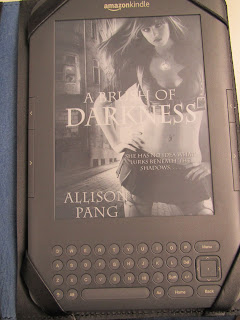 I broke down last month and bought the new Kindle 3 in its lovely graphite form.  (And as you can see,  I’ve jailbroken it so that the screensaver is actually my book cover. I’m a rebel, yo.)

And truthfully, this is my second Kindle 3. I ended up returning the first one a few weeks after I bought it because the letters and words started to rub off on the rubber buttons. When I opened the first one, I noticed that some of the letters seemed a bit faded. Fast forward a few weeks to the fact that the Menu/Back/Home buttons were nearly completely gone…eh. not so good. I did a little poking about and discovered I wasn’t the only one – so maybe a bad batch went out. In either case, I called Amazon and they replaced it for free with a new device (not a refurb) since it was within the initial 30 day purchase period. The new one seems to be holding up much better and I did note that the ink on the buttons appears to be made of sterner stuff.

I did go ahead and buy both a skin and a cover for it just to be on the safe side, though I’m not sure I’m going to keep the skin or not. 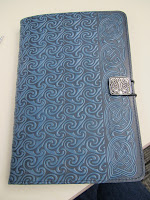 The cover is from Oberon Design and is hand crafted leather. (Blue and Celtic? Sign me up!) It doesn’t add too much bulk and I can still fit the whole thing into my little purse without too much trouble. Although the metal clasp is…um magnetic. My iPod was sticking to it pretty hard the other day which is probably not good for long term. I also went ahead and bought a skin from Skin It. I tend to skin every device I own with whatever I feel like doing at that moment, so my current skin for the Kindle is Chococat.

<– This would be the back, obviously. 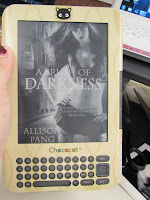 <– And this would be the front. Not sure I like the contrast there. Might make things a little harder to read than I thought, but I’ll test it out.

In either case, I really do adore the device. I’ve probably spent more on e-books in the last few months then I’ve spent in a bookstore in the last year.  In fact, I hardly ever have time to make it into a bookstore these days, so being able to snag what I’m interested in immediately is a big plus for me, particularly if I see a good write up or review on a blog. *poof* Now I have it.

(And on another note, if the book is a “Keeper,”  I’ll often buy the e-book right off the bat so that I can read it, but I’ll follow up and buy it in paper later. Bonus for everyone, I suppose.)

This entry was posted in kindle. Bookmark the permalink.

9 Responses to Covering the Kindle 3