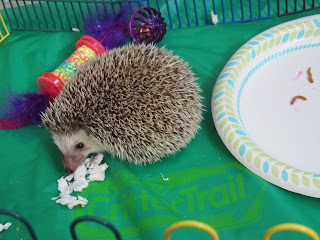 It’s come to my attention that I may have adopted a Grumpy Hedgehog. After four weeks of ownership, I have concluded that Tumbleweed is quite possibly as prickly on the inside as she is on the outside. Makes it hard for a cuddle.

However, I have noticed that when I put her in her big pink hamster ball, she comes out and runs all around without any fear at all. (I smell a metaphor here. Stay tuned tomorrow.) Alas, the main point to this post is that I actually decided to take her to the vet on Saturday. (Lucky me, we have an exotic vet group right up the street.) Even if she was grumpy for the sake of being grumpy, I figured it wouldn’t hurt to at least get a baseline on her in case anything appeared to be wrong in the future.

Of course, that does pose a bit of a problem. How exactly, does one examine a hedgehog?  Particularly one that has no interest in being poked and prodded?

Simple answer? Knock her ass out. Which they did. The vet was nice enough to let me come into the exam room to watch what they did, and I have to say it’s rather amusing to see a…well…deflated hedgehog, is pretty much the only word for it. Flat out on her back and completely relaxed, you can see there’s a lot of extra skin (needed to ball up nice and tight). 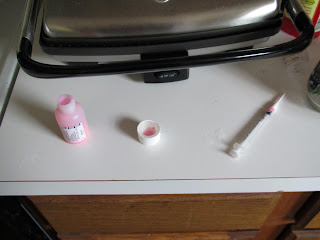 At any rate, the long and short of it is that she’s completely normal in weight and growth. No mites. No parasites (Tumbleweed was gracious enough to take a crap in the carrier before I got there – instant fecal test!). Teeth look good. Paws? Poopy covered, even though I bathe them almost every day. However, vet did notice a few cuts in between her fingers on the front paws. Not sure how they would have gotten there, but to be on the safe side, I was given some oral antibiotics.

This is a complete nightmare.

They scruffed her for her first dose, but as I don’t really possess those sorts of nerves, that’s not going to work for me. She won’t take it off the syringe. I thought about filling up a strawberry or a banana, but Tumbleweed is very picky and won’t eat anything but cat kibble. And meal worms. Ah, yes. I’ll inject the mealworms. 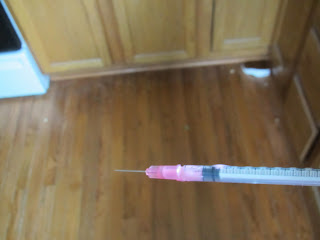 Mealworms are small. They’re also refrigerated so it makes them slow. However, none of them particularly like being jammed with a needle and pumped full of pink meds.

Unfortunately, by the time I got the mealworms too her, they’d waggled around enough to squeeze most of the meds back out and onto the plate.

She did eat them, but I’m not sure how much medicine she actually got as a result. 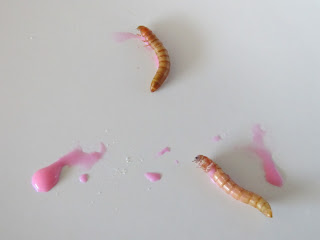 So I thought I’d be a bit more clever. Thought about getting some crickets. I hear hedgehogs like crickets. Of course, crickets hop about.

Vet suggested if I did that, that I just pull off a few of their legs and that would solve that problem.

Or use the bathtub.

Neither of these is particularly cool with me.  So, I went out and bought bigger worms. I don’t know what they are, but they’re huge. And you don’t refrigerate them, so they move really fast. Now, I’d heard that you have to cut their heads off if you feed them to hedgehogs because they’re big enough that even if the hedgehog eats them the bugs can still bite. (And yes, they have big pincers).

So. I cut off a head. Pumped it full of the pink stuff. Gave it to the hedgehog.

Who ignored it utterly.

Now part of this may be because I have to give her the drugs twice a day. Hedgehogs are nocturnal, so waking her up at 10 AM to try to feed her a drug-infested worm is a lot like me waking your ass up at 3 AM to force feed you a PB&J. Full of drugs. (Or so I explained to the 7-year-old.)

So. Yeah. I admit I’m a little stuck here. If she were a bit more tame I’d attempt something else, but to be honest, I’m thinking I might just keep an eye on those feet via bath and scrap the drug thing all together.

I am very open to suggestions, however.

This entry was posted in hedgehog. Bookmark the permalink.

9 Responses to Taming the Hedgehog