Not Really a Review 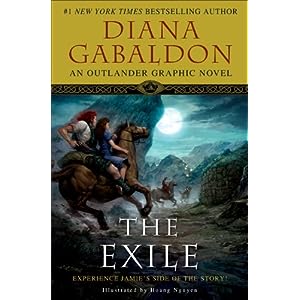 I love graphics novels and I love Diana Gabaldon’s Outlander series (the first three in particular), but I didn’t love this.

Aside from the illustrative quirks (which I’ll throw down below), the storyline was just a big hot mess. The concept here was that it was supposed to be Outlander (the first 1/3 of it,) told from Jamie’s perspective. There was so much potential here, given what we knew about his history…but the thing was, it wasn’t really told from his perspective, at least not entirely.

In fact, the execution of the book leaves a lot to be desired. Instead of a comprehensive story, we’re whisked away between chunks of the “good parts” of Outlander. Not to mention the addition of a subplot that did pretty much NOTHING involving another traveler between the stones.Which I guess is interesting on one level, but if the reader either wasn’t familiar with how graphic novels should work or hadn’t read Outlander, it would be mighty confusing. Hell, I’ve read Outlander several times and I couldn’t figure out wtf was going on from scene to scene sometimes (compounded by the fact that with the exception of Jamie with his red hair, most of the other men all pretty much looked the same. Had to go back several times to try to figure out who was who.)

That’s a bit of a failure on the artistic side. Graphic novels aren’t merely comic book pulp, but visual tellings of a story – a picture is worth a thousand words, after all –  but if a reader has to look at it too hard to find out what’s going on, then it’s not a very good graphic novel, IMHO.

Now, I did read some of the comments on Amazon and a lot of buyers didn’t know what a graphic novel was and were pissed that they had plunked down $25 for something that was “for kids.” There were also some people peeved that all the people looked Asian. Now, the artist is Asian, but I don’t think I would have pegged the book as having an Asian flare if people hadn’t been bitching about it. (And maybe that’s just because I’ve read so much manga that I tend not to notice stuff like that anymore. It is what it is and that may just be that artist’s style.)

Now, what I will say is that the art as a whole was pretty inconsistent. The landscapes were great, but the characters? Meh.

It’s been said that Diana has often pegged model Gabriel Aubry as a sort of character model for Jamie. And clearly the artist went with that, at least in the beginning: 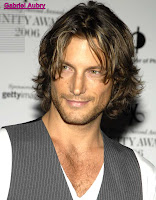 And yeah, he’s hot as balls…but not particularly Scottish looking, though I wouldn’t toss him out of bed for eating bacon either. 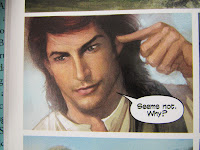 And here’s the initial artist interpretation: –>
So you can see there’s quite a bit of similarity there. But it doesn’t stay. Jamie’s eyes are supposed to be blue, but in half the panels they’re showing up brown, for example – and that’s just sloppy. 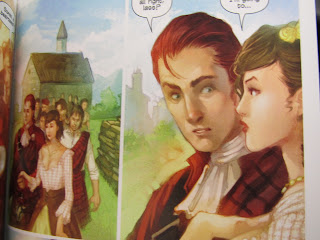 Plus he seems to get younger as the story goes along. Here’s a shot of Jamie and Claire at their wedding. It’s like he’s 15 now, or something. 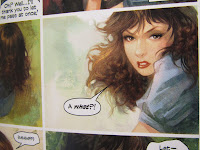 And speaking of Claire…
She starts out pretty lovely – but the facial expressions through most of the book are so bizarre and cartoony that I just couldn’t take most of her panels seriously at all.
Not to mention the massive amounts of boobage. 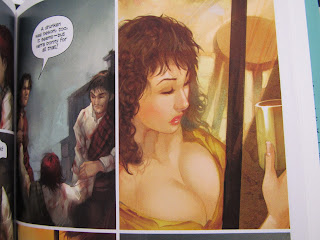 I mean, sure I get that Claire is attractive, but I don’t remember Jamie ever commenting on anything other than how awesome her arse was.
<– WTF is this? Her breasts are larger than her head.
So yeah. I really wanted to like this. I may still pick up the next volume if there is one, simply to have the set, but overall this was a major disappointment.
This entry was posted in gabaldon, outlander, review, wtf. Bookmark the permalink.

9 Responses to Not Really a Review