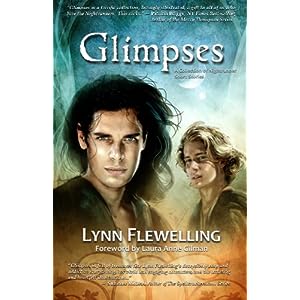 I’m going to continue my fine track record of never really reviewing books today by mentioning that Glimpses, by Lynn Flewelling, is out this week.

If you’re a fan of the Nightrunner series, you won’t want to miss this  professionally published short story collection, which contains a number of pieces (and fan-illustrations) that help fill in the gaps of some of the lives of the characters.

For any true fan, most of these stories have been alluded to over the course of the novels, but it’s nice to see some of them finally getting a chance to shine.

The stories range from Seregil’s experiences after exile (including when he first meets Micum), as well as the story behind what happened with Alec’s parents. We also get a look at the first real sexual encounter between Alec and Seregil – something that’s been a long time coming, if you’ll pardon the pun.

As far as sex scenes go, three of the pieces do have them (one m/f, two m/m), and while they’re definitely not what I would label erotica, they’re certainly a lot more explicit than we’ve seen in the Nightrunner books thus far. But they’re nicely done and sweetly written. The Bond, in particular, is written as though it could be dropped in right at the end of Stalking Darkness and it would fit perfectly. Considering that the original books were written over 10 years ago, that’s quite an achievement – it’s hard to capture the way characters were in the earlier days, but Lynn does so quite masterfully.

As a last parting shot, the book ends with excerpt from the next full-length novel, which will be out in 2011 (working title The Summer Players).

This entry was posted in blog and tagged review. Bookmark the permalink.