Rebel Without A Clue 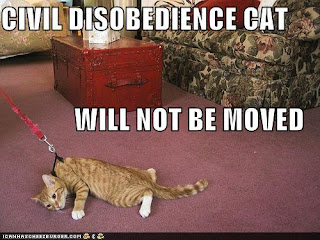 Jeffe picked out this picture for me yesterday, after I lamented to her about Connor’s latest 1st grade trials and tribulations.

It turns out Connor appears to have a bit of an issue with authority. Not in a particularly evil way – I don’t suspect he’s got a plot for world domination just yet. Just that he apparently doesn’t feel the need to pay much attention to the rules.

I’m of two minds on this. On one hand, if he’s distracting the other kids from getting their work done for whatever reason, then yes, his ass needs to be handed to him – and it has been, several times.

On the other, he got written up last week for jumping down the stairs in the hallway instead of walking. And again yesterday for making a siren sound in the lunchroom.  And for destroying school property – for putting a pencil hole into an eraser. He got in trouble for throwing food in the lunchroom, too (apparently this is as grave an offense as selling drugs or gang activity, according to the handbook. No, I don’t condone food throwing at all – but it was a grape, not an entire pie – so a little perspective may be in order.)

He also apparently disrupted music class last month by changing all the words to whatever they were singing to pee references. So…yeah.

He knows what the rules are, but he always just has to tell kid x “one more thing.” Or that he did Y because he “felt like it.”

I mean – he’s not stupid. He’s not malicious. (Maybe a tad clueless at times, but who isn’t?) So why does he feel as though the rules don’t apply to him? I mean, I don’t want a spoon-fed robot, but I don’t want him labeled as a “problem child,” either. And I’m beginning to think that is happening. These last few weeks, the behavior issues have appeared to explode, as least as far as we have been notified.

(And on our side, yes, there have been consequences for his actions. Mr myn actually put the D/S in the gun safe over a month ago. There is no TV in the house except on Friday nights and part of Saturday. (A fact he appears to grieve somewhat bitterly over…but he was warned repeatedly that privileges would be removed if he didn’t get with the program, and so they have.)

At this point, it looks like we have a meeting with the principal in the next few days to figure out what our course of action is. Hopefully without being labeled as “problem parents,” but we’ll see. My mother was a middle-school teacher. I am very much aware of the political bullshit that goes on behind the scenes in school – one of the reasons you’ll never catch me as part of the PTA. I have enough drama-llamas in my life without adding the issues of some helicopter mom getting in my face about who’s running the telephone tree this month.

In the meantime, suppose we’ll just plug away and hope we can work on things with him over the summer. I’m not looking for a model citizen. Just someone who can color outside the lines a little more quietly.

This entry was posted in Connor, rant, rules. Bookmark the permalink.

8 Responses to Rebel Without A Clue