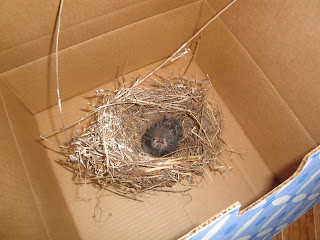 Generally speaking, the rule of thumb when you see a baby bird on the ground is to walk on by. Particularly if they’re just hopping around by themselves – it usually means it’s a fledgling and mom & dad are somewhere nearby, continuing to take care of it.

In this case, however – my little grackle friend isn’t quite there yet. He can hop around a little bit, but his pinions are still coming in and he’s pretty unsteady on his feet.

Connor and mr myn found him yesterday evening when they went out to play ball. It appeared his nest had been blown out of the tree and his sibling was lying dead in the grass. (Looks like he just froze/starved to death, but I’m not sure.) The remains of another bird were also under the tree – maybe another sibling, but it was much smaller – I suspect mom may have pushed it out of the nest a week ago. This remaining grackle was curled up in the grass but very chilly.

I warmed him up in my hands and put him in the nest, but we couldn’t find a way to get the nest back up in the tree high enough. (And we have at least 5 cats that wander about the house – my 2, plus 3 ferals that stop by to eat.). I was also concerned about the fact that the temperature was going to drop into the 30’s last night, so we brought him inside. Connor immediately went out and dug up a few worms, which I fed him (the bird, that is, not Connor).

I’ve called a licensed bird rehabber this morning and I’m waiting for her to call back, and intermittently feeding the grackle cat kibble soaked in water. (Best I could do today, though it’s not really a long term solution). I’m using the blunt ends of bamboo skewers to drop the food right on in there and it seems to be working.

As an aside – for those of you out there who think it would be fun to raise a baby bird – keep in mind they have to be fed about every 15 -30 minutes. All day. Every day. Plus it’s illegal in most cases. Not to be a downer or anything, just that it’s best to leave this sort of thing to the pros.

Edit: Also – if you find a baby bird like this *NEVER* feed it bread, water or any sort of milk product. You will kill it if you do so.

This entry was posted in grackles. Bookmark the permalink.