When the Words Die. 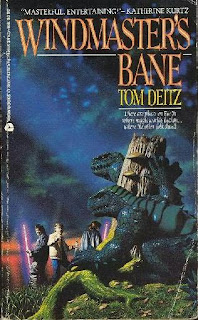 When I was in grade school, I really adored this series by Tom Deitz. It was sort of Urban Fantasy before UF actually became a genre – essentially the Sidhe in Georgia, with a few hapless mortals tossed into the mix.

I probably reread those first 4 or 5 books over and over again through the years, and every once in a while a new one would come out and I’d snatch it up. (I think the last once came out in 1998 – but the series had slowed down considerably by then, only coming out every few years). Times were different then. We had no internet, so I didn’t usually find out about new releases unless I physically showed up at the book store.

I think we’re all a bit spoiled these days – 30 seconds of googling an author’s name is sure to bring me his or her entire booklist, a bio, a blog, a twitter or facebook page.We can find out what authors are working on, what their favorite music is, the name of their cats. Sometimes we find out more than we bargained for.

This connection can be good – it can help solidify loyalty between a reader and an author or a series. But sometimes it seems to take away the mystique of the process. It’s hard for me to personally enjoy a a story if I’ve lost respect for the author – whether that’s due to an untimely rant on a blog or suddenly finding out their latest sexual fetish – there are things that are probably best left unsaid.

Anyway, so I actually found my copy of Windmaster’s Bane out in the garage last night when I was poking around some boxes and I realized it had been a while since I’d heard anything new from the author. So I looked him up in the off chance I could say hi. After all, I’m Facebooked to all sorts of authors now – including my golden heroes like Charles de Lint and Jacqueline Carey. (Not that I really bug them, ever. Just kinda cool to be “connected”)

And I found out he died last year of heart issues. Which sucks, because now I know that even though the chance of him actually producing another book in this series was probably pretty low, there’s no chance of it at all now.

I guess you can make the argument that a good author never really dies. Books and stories can really touch people, so I suppose there’s a sort of immortality there that’s hard to beat. It’s still a bit painful to realize that what you have is all you’ll ever get.

Selfish, maybe. But there it is.

This entry was posted in authors, random. Bookmark the permalink.

5 Responses to When the Words Die.