At the Starting Line 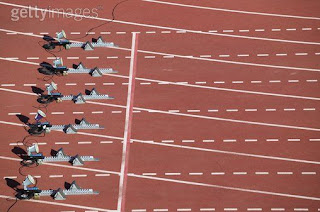 I had a very long stride, earning me the nickname of ‘Horse’. My legs would completely leave the ground at times. (And not to be too much of a freak, but although I’m about 5’6″ tall, my arm and leg-spans are those of someone who is 5’9″. Had to get measured for a potential heart issue once, which is how I know.)

Unfortunately, my running career went down the tubes when I massively injured my right knee. In a nutshell, I was doing the long jump and something went terribly wrong –  when I landed, I landed on my right leg, which was completely locked into a straight position, thereby tearing the living fuck out of something in the back.) I’ll spare you the rest of the details, but it was messy and it’s never really healed quite right. It bends a little backwards now, as a result and I’ve always been a little gun-shy of that leg ever since.

But before all that, before I would run my races, there was always a certain amount of mental prep involved, although for me it was often in the form of a sickening sort of dread in the pit of my stomach. Still, there’s a certain comfort in knowing that however nervous I was before a race, it would be all over in the span of a minute.

I haven’t written much this week. Part of that is nerves – it’s hard for me to concentrate with so much exciting news coming down the pipeline. But part of it is realizing that this particular race isn’t going to be over that quickly. Plotting out which curve to start sprinting at isn’t going to be enough. I’m on the brink of a sort of life-changing moment and there are things that need to be set into motion before I can get there. And I feel like I’m hovering a bit, but I also want to get my ducks in a row before I commit myself to a particular course of action.

So here I am at the starting line, waiting for the gun to go off.

4 Responses to At the Starting Line