Still Not Really a Review 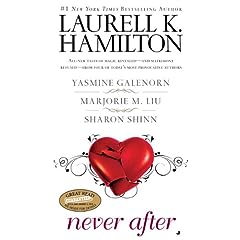 Since I actually did get my Kindle set up and working last week (and skinned, thanks to the lovely people over at skinit.com, I figured I’d go ahead and buy a few books off it and see how I liked reading it.

It’s taken me a little bit, but I have to admit I’m really liking it now. (I went a little cross-eyed at first for some reason, but I’ve been using it every night for the past week and I don’t think I have any complaints. In fact, I’m beta reading for a few people and it’s been great being able to email myself the word docs directly to the device and now I can read them wherever.

At any rate, the first book I actually finished was Never After. Now sadly enough, the only author I’ve ever read before in the list was LKH. I’ve heard of the others, of course, but just never got around to picking anything up by them, though that’s probably going to change. 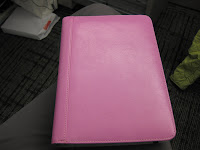 Can He Bake Cherry Pie? The LKH story. Not much to say here. I’ve had a love/hate thing going on with LKH’s writing for years. The best I can say about the story is that it seems phoned in. And that’s where I’m going to leave it.

Shadow of the Mist. Yasmine Galanorn’s piece was nice, but there were times when I felt like the heroine was TSTL. I think people who have read her Sisters of the Moon series might enjoy it more – not that I didn’t understand what was going on, but it might have been a little more satisfying for me if I had a greater emotional connection to the characters. I will probably pick up the first one to delve a little deeper since I’ve heard good things about them. 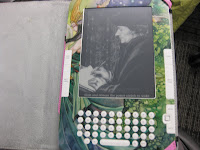 On the other hand, I utterly adored Tangleroot Palace by Majorie M. Liu. Even though I’d pretty much figured on how it was going to end fairly quickly, I was greatly captured by the writing, and there was a nice sort of whimsy to the piece.

The Wrong BrideGroom.  I honestly started out not liking this story by Sharon Shinn very much, finding the heroine particularly trite and obnoxious. Which was probably by the point. I finished it out and I thought it did a good job at going through the theme of being careful what you wish for, but I wasn’t overly taken with it.

All in all, not too bad for an anthology where I didn’t know what to expect. It’s always nice to find new authors, so in that respect, I’ll call it a success.

This entry was posted in kindle, review. Bookmark the permalink.

4 Responses to Still Not Really a Review