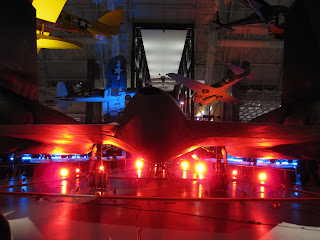 I’ve never been overly fond of the beast known as the office Christmas party. (Or Holiday party, if you prefer). Most of the time it seems to be nothing more than an excuse to force employees to rub shoulders yet again, pretending they actually like each other over a cup of eggnog pretentiousness.

At least, that’s always been my experience with them. In past years, I’ve been to parties at the CEO’s house (previous employers), where it seemed like nothing more than a way for the bigwigs to show off just how much more they had – bigger houses, pools, servants, a chance to lambada with the newest blond trophy girlfriend – then the rest of us peons. Do I sound bitter? Maybe. I have to admit that in my younger, leaner years, being told that instead of paying out holiday bonuses, the amount was going to go towards the party was a bit of a slap in the face. If you couldn’t make the party, that was just too bad. Never mind that extra $100 or so would have gone a lot farther for me in the form of paying rent or eating. (And believe me, living outside of DC on only 25k a year is pretty hollow). 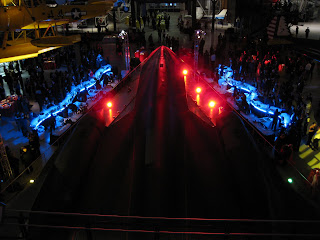 And of course, I used to work for much smaller companies – where it would be terribly easy to tell if I didn’t show up and pretend that I actually gave a shit about having to take my shoes off to walk over someone’s pristine white carpets.

Eventually I switched jobs/moved up the ladder enough that the parties didn’t bother me as much. If I didn’t feel like going, I just didn’t.

My current company has over 13,000 employees, so they don’t usually do an office party. Mostly it’s just the little departments getting together and going out to a bar or a place to eat. Which has been fine. I actually really like the people I work with these days, and a party like that really isn’t much more than a glorified happy hour. (And I usually prefer it that way…it’s more honest) My position comes out of overhead anyway, so I don’t get a bonus regardless of how the company is doing 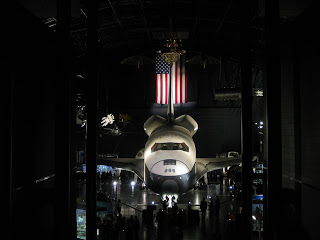 This year, however, the company rented out the entire Air & Space Museum (the one from Transformers II), catered a buffet, an open bar, and a live band. I suppose if you’re going to show off, might as well do it in style. So to at least enjoy the spectacle of the thing, mr myn and I found a sitter and put on our best cocktail wear and headed out that way last night.

And you know, it was pretty cool from an eye candy perspective, but just as hollow as any other office party I’ve ever been to. Sure, I chatted people up a bit, but I don’t really drink, so the pleasures of an open bar are a bit lost on me. Although, I have to admit the little chocolate cups full of eggnog mousse were pretty awesome.  There weren’t too many people dancing, though, which is kind of a bummer, but it wasn’t really that sort of crowd. (Though mr myn and I did cut a rug up on the 3rd level balcony when the swing music started, but only because we couldn’t make it down to the dance floor in time…shame, really, no one else apparently knew how to swing. Alas.) 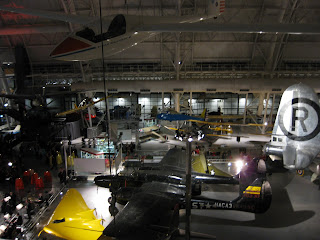 In the end, I suppose we had a good time, at least by how such things are measured. And I was able to impress the kids with the fact that I got a chance to dance beneath Jetfire.

(I ate dinner within touching distance of the Mars Rover too, but that didn’t seem to impress them nearly as much. Go figure.)

3 Responses to Dancing Beneath Jetfire