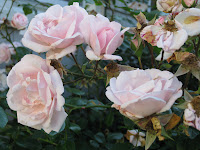 I don’t know what kind of roses these are. They grow outside the window of one of the bedrooms at the beach house. For the most part, we let the bush grow wild, only cutting it back when it started getting *really* obnoxious. Otherwise, we just left it alone. Sometimes my mom would take cuttings and put them in a jar in the kitchen, and once a friend and I attempted to make some kind of rose perfume with the petals. (Being about ten and having no idea how to do it, we only ended up with vaguely rose- scented water, but I suppose that was good enough for us.)

When I was twelve, I figured out the roses floated. Ever the fanciful child, I plucked them, one at a time, and walked down to the bay and dropped them into the sea. They would get picked up by the current and float past the moorings and out of sight and then I’d go back and get another one and do it again. I used to imagine them drifting in and out among the tides, hoping they might be found by a passing mermaid.
I’m not that fanciful these days. But I wish I was.
This entry was posted in mermaid, random, roses. Bookmark the permalink.