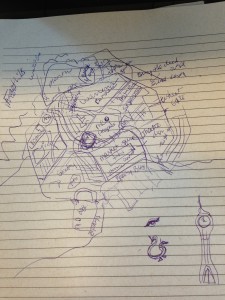 I mapped out a city last night. Admittedly it’s not much of a map. I actually have a copy of Campaign Cartographer 3 somewhere (and City Builder 3, among others), but the learning curve is rather steep and as lovely as the pictures it can create are, I just don’t have time to learn it right this second.

So I ended up doing the quick and dirty sketch by hand. And it’s pretty wretched, but it gives me a better understanding of the places I’m trying to describe and the paths the characters need to take to get to where they’re going.

I ended up creating a detailed time line as well – which isn’t something I usually do, but this particular story has a lot of history. While I don’t need to know *every* little detail, there’s enough going on that I have to make sure things are happening at the right time. And a good thing too, as I discovered people’s ages weren’t lining up right. Had to tack on an extra 5 years to make sure things worked out the way they needed to.

This much detail is a new thing for me – I have a tendency to just keep all this sort of stuff in my head and winging it. As I’ve been going through my edits and realizing things weren’t working out as neatly as they should, I found that writing it all out became very helpful in knocking things into place.

I’m still going page by page for the base edits, but the sheer amount of extra stuff I’ll be going back to add is pretty significant. Both the aforementioned details as well as a good sized chunk of plot overhaul.Some scenes get to move around, but there’s several chapters of all new stuff that will need to be written and the ending has changed quite a bit. (But the good news is that I’ve actually plotted it out and while I thought I’d written myself into a corner at one point, it turns out I’ve got things under better control than I thought.)

Still. So much to work through. Part of me wants to just get back into the wip and start tweaking, but I really am a big believer in letting a work breathe a little before making changes. So I’m going to continue making notes and shuffling things about, but I’m feeling much better about it now, and that’s a good thing.

Now if I can just get the majority of it done before my surgery in June, I’ll be all set. (Let’s call it an internal hernia of sorts, and leave it at that. It’s not going to be overly pleasant.)

This entry was posted in blog and tagged ironheart, updates, world building. Bookmark the permalink.