Fox in a Box 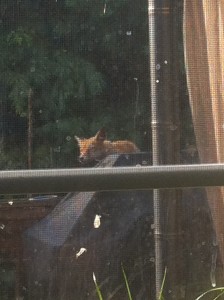 So if you’ve been following me on Twitter or Facebook at all, you’ve probably seen me talk about the fox living on my deck. In the insulated cat house, no less. Only the thing is? I don’t have one fox. I apparently have two.

The pictures I have are of the first fox (whom I have dubbed Foxy Lady). To be honest, except for this one day I haven’t seen her again. She popped up on the deck to eat up some leftover cat food the cats hadn’t eaten. And then she jumped into the flower box on the deck rail (behind the grill) and sunbathed and scratched for about 2 hours.

So the next night when I startled something out of the cat house right next to the grill, I 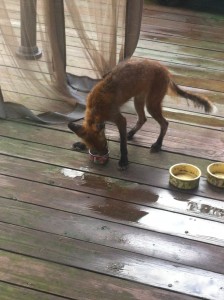 assumed it was her since I didn’t get a good look at whatever ran off.  But it’s not. It’s a male, completely hairless and pretty much emaciated. (I haven’t gotten any pictures of him because he buggers out into the trees as soon as I set foot on the deck.)  I’ve dubbed him Gideon, for obvious reasons.

So the thing is, there’s a local rehabber in the area who’s going to get me the medicine needed to treat the mange (though trying to hook up with her to get the stuff is becoming a bit of an exercise in phone tag – I really hope she’s home tonight.)

I’ve already accepted the fact that the cat house is going to have to be taken down to the dump as soon as this whole mess gets sorted. Which is a shame because I’ve had a lot of feral cats stop over in it over the years. (Sometimes for a few days or weeks and then they move on. My own cats stopped using it years ago.) But mange is massively contagious to other foxes and even if the cats can’t catch it directly, I doubt anything else is going to use the house now, even if 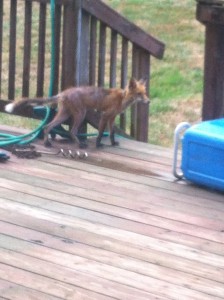 My cats aren’t too thrilled with the fox situation anyway – for the most part they’re ignoring each other, but unlike my visiting possum (where they will all sit on the deck and chill together) the cats are mostly avoiding the deck entirely – this also includes the ferals. Can’t really blame them there – the fox(es) are crapping pretty regularly on the deck, which I’m guessing is a territorial thing. Nasty, because I obviously can’t just leave it there, so I glove up each morning and get rid of it.

I’m going to try to document this little experiment in helping the foxes, but I’m beginning think that in Gideon’s case it might be more humane to have Animal Control come out and put him down. Mange is just a terrible way to die and he’s clearly miserable and starving.  The reason why he’s in the cat house is because he can’t regulate his body temperature 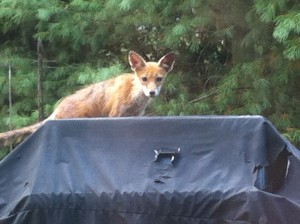 without any fur, even in the heat and he’s too weak to really hunt.

Pictures to come if I’m lucky enough to get any. Skittish creatures, foxes.

This entry was posted in blog and tagged fox and willow, foxes, mange. Bookmark the permalink.

4 Responses to Fox in a Box