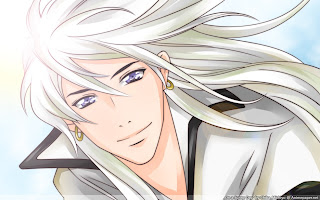 I’ve been a huge manga/anime fan for quite some time now. Not that I have much time to watch the anime these days, but for a while I was pretty into it. (I still have shelves of manga upstairs. No idea what I’m going to do with it all.)

And it’s funny, because some of the plots, particularly in the shoujo type manga, are fairly improbably…and often ridiculous. In fact, I’m pretty sure if I picked up an actual written book with the same sort of concepts, I’d probably chuck it at the wall within an hour.

But for some reason, the pretty pictures make it all worthwhile. Seriously, maybe it’s just the art style. Maybe it’s the bishies. (Yeah, I’m a sucker for the pretty boys.) I honestly don’t know, but whatever the deal is, I can easily set aside disbelief and just *nodnod* my way through a manga in 30 minutes and be craving more at the end.

I guess it’s like anything else – sometimes eye-candy can substitute for a so-so plot…and sometimes a great plot can carry substandard art. (Bonus if it can do both.)

The bigger issue is being able to get it here in the US. Sure, many bookstores do carry it, but usually the English translations are months or years behind their Japanese counterparts, which is somewhat infuriating when you get to the end of a volume and you want MOAR. Bad enough when the next one hasn’t been written yet, but when you *know* it’s out there and you can’t get it? Gah.

And I did have a Yahoo! Japan account for a while to do my cel collecting, so sometimes I’d manage to snag some of the Japanese volumes as well, although between the extra cost I’d have to pay in shipping and the fees to the go-between (YJapan doesn’t take PayPal, go figure) it made it hard to justify wallet-wise. Plus, I don’t read Japanese. I could usually figure out what was going on via the pictures, but it loses a lot in the translation, so to speak, especially if there’s an important detail kicking around in that kanji. (And many manga are produced in series, a chapter or two in manga magazines, as opposed to actual books. Makes them hard to find.)

Which brings me to scanlation sites, which are where good-hearted people practice a benign sort of piracy involving the scan-and-translation of these manga, uploading them to where the rest of us can get a look-see. It’s extremely time consuming – and an obvious labor of love. Each page has to be scanned, translated and then someone has to photoshop the English over top of everything.

I’m of two minds of that, of course – because yes, it *is* piracy, but many of the scanlation sites won’t provide scans of manga that have been licensed in the US. (And stop/take down what they do have, once a title does get licensed.) Does that make it better or worse? I don’t know. I do know that in the past, when I did download it to get a preview of what was coming, it never stopped me from purchasing the licensed copy when it came out – simply to complete my collection, if nothing else. But still. Having my own stuff pirated has changed my perspective a bit.

The rub is that many titles will never be available here, for whatever reason…and sometimes they start out being licensed, but because of poor sales or the company folding, never get completed. Tokyopop is closing its doors at the end of the month – which is kind of a bummer. I know they tried to provide American artists a shot at the manga scene (and unfortunately I’ve heard dubious things about their terms), but they were also providing translations of Japanese titles.

One of the ones I was following was Immortal Rain, the last volume (8) of which was released back in September. Of 2007. Additional volumes have been released in Japan and I believe the story should actually be completed at the end of this month. With Tokyopop going under, they’ll never be released here and I’ll never know the ending.

But with the help of the scanlation sites, I was able to find the remaining volumes today. And I read them.

I’m not going to make any excuses about it, because I really wanted to know what happened, and I would have given anything to be able to buy it directly. I’ve been waiting *years* to do so. But on the other hand, the mangaka doesn’t see any profit – I’ve essentially stolen out of her pocket to selfishly finish the story.

Not a proud thing to admit, but I’m not sure what the answer is. It’s too bad the scanlators can’t work out a licensing deal with the creators and make the best of both worlds, but who knows if that will ever happen.

This entry was posted in blog and tagged manga. Bookmark the permalink.