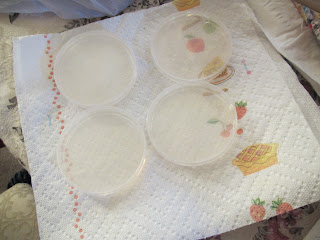 Connor got a Disgusting Science kit for Christmas this year. Much of it involves getting a good look at the overall grossness that is the human body. Always a treat, but the science major in me approves whole-heartedly, especially because the kit included materials to create and set up our own petri dishes.

(It’s very easy to do, really, since agar is really  just gelatin and sugar and water). So there’s a nice set of four ready to go petri dishes ready to go now. Connor was quick to point out that agar kinda smells bad. (And yeah, it’s not the greatest thing ever when you’re boiling it on the stove, but it’s not that bad either.)

Science is often messy and smelly. (Much like creativity, really.) In this case we’ve got our pristine substrate, ready for scoring with whatever nasty things we can find. We haven’t decided if Connor’s going to do four q-tips of his own, or we’ll each get one or what, but I will spare you all the pictures of what we manage to grow. And joy, there’s plenty for refills. Part of me is wondering if I shouldn’t do bathroom or kitchen swabs. You know. Just to see. On the other hand, ignorance is bliss. Right?

Incidentally, I did a variation of this in sixth grade science class – we all got to cough onto our individual dishes. One poor kid must have had the plague that day because a week later his dish was coated with this hideous red and purple furry stuff. I seem to recall it tipped its hat at us and walked right out of the classroom one day, never to return.

Hopefully we won’t get anything nearly that bad, but if we do, I suppose I can write about it. 🙂

This entry was posted in blog, ewww gross. Bookmark the permalink.