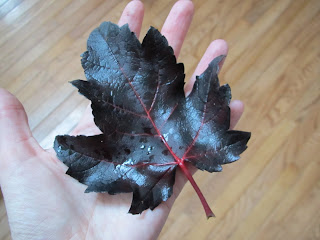 I found a black leaf yesterday (with red veins). It’s apropos of nothing except that I thought it would make an awesome writing prompt – Blood Leaves, anyone?

Anyway, I spent all of the weekend working on the rough draft revisions of Book 2 – and I’m actually taking a vacation day from the real job today to implement them in the Word doc. I’m really not fond of having to do that, but it is what it is and sometimes time needs to be shuffled. (And deadlines wait for no one.)

Good things that happened last week: Awesome Christmas cards from my DG fangirl peeps! (Including a brilliant hedgehog card which I will have to scan in later.) I also found out that BoD has been picked up by Target and Walmart. Doesn’t mean the book will be sold in every store across the country – I don’t know how many were sold or where they’re going, but it’s still pretty damn cool.

Bad things that happened last week: My credit card number was stolen. Someone went and bought like $60 worth of flowers with it, but the charge didn’t actually show up on my statement – the cc company had to call to tell me. And of course, once we established that it was, in fact, fraudulent, we shut the card down. The really crappy thing is I have a ton of stuff on auto-charge for that card. Plus, it’s almost Christmas, so that’s going to make it a bit hard to get all the shopping done that I need to, but hopefully it won’t take them too long to get me a new card.

Miscellaneous stuff that needs to get done: Interview questions – I have a bunch to write up for next month. And a bunch of guest posts, as stated last week. I also have to finish up with the Word-Whores blog design, since that’s going live at the end of the month. Erm. And finish up the outline for Book 3. In a nutshell, it’s going to be a pretty busy few weeks, so bear with me. 🙂

This entry was posted in blog and tagged busy, updates. Bookmark the permalink.